Who I am now

Bystanders stare through the windows of Cape Jervis Ferry Terminal, watching a motorcyclist struggling with their stationary, luggage-laden bike against the blustery wind. The enormous BMW adventure bike rocks violently left and right, forcing the rider to plant the left foot down several times, while fossicking for that elusive side stand; the challenge not going unnoticed by the gawking bystanders. One could almost sense their thoughts: ‘What’s the bet, 50:1? You’re on,’ and the rider is probably thinking ‘Lordy, don’t drop my bike!’

Other riders nearby, shout pointlessly at each other, through their helmets as the wind whips away their muffled words. They give up and commence the art of hand flapping, nodding and finger pointing, the motorcyclist’s default back-up language. The BMW rider triumphantly beats the force of the wind, setting the bike onto the stand. As helmets come off, those watching only then realise, the riders are all women. 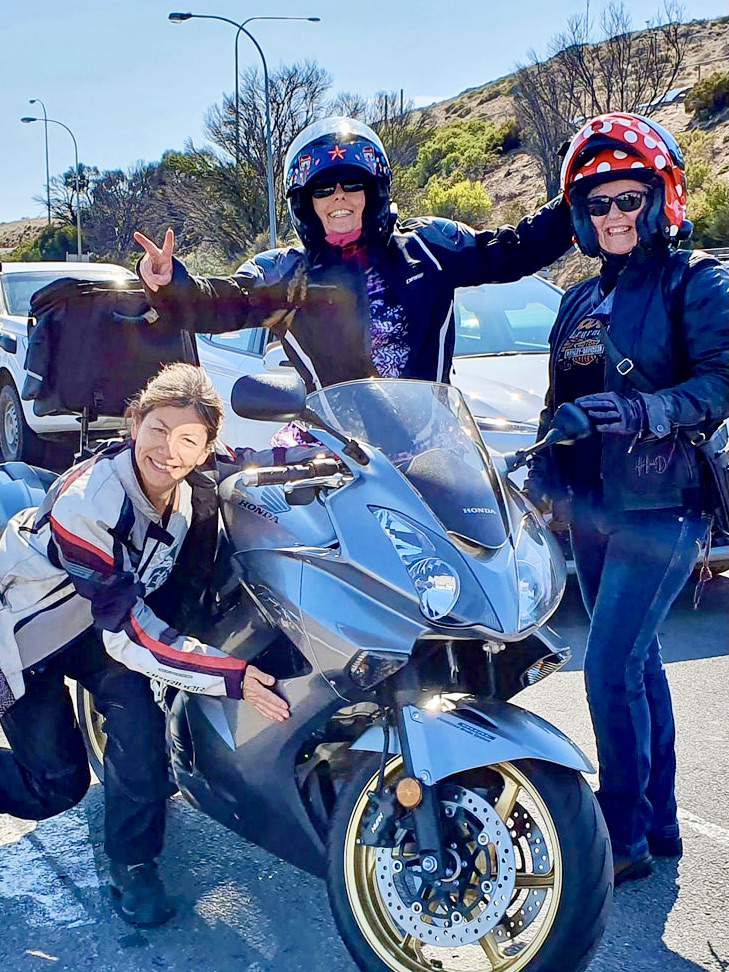 Ten women meeting up, some for the first time, but all connected through Women2Wheels, a motorcycling group of South Australian women riders. They are off to Kangaroo Island via the ferry, for a four-day motorcycling adventure including exploring, gal time, sightseeing and to participate in the annual Black Dog Ride. A crescendo of female voices rise above the terminal buzz, accompanied by shameless hugging and kissing, any shred of social distancing out the window. Nobody gets ignored; nobody is left out. The first timers get the same huggable welcome.

Toni, a very experienced rider in her early sixties, is the genuine article of a dedicated biker, riding daily. With bangles dangling, nails brightly painted and a dab of pink lipstick, she could be the Office Secretary, a Team Manager, or a lady out shopping. But this weekend, she is the Pack Leader, the instigator and organiser, an immensely important role. Apart from being the key hugger, her next responsibilities are to meet and greet, ensuring all feel welcomed and then to gather, all the women together when on the Island, for the start of their adventures. 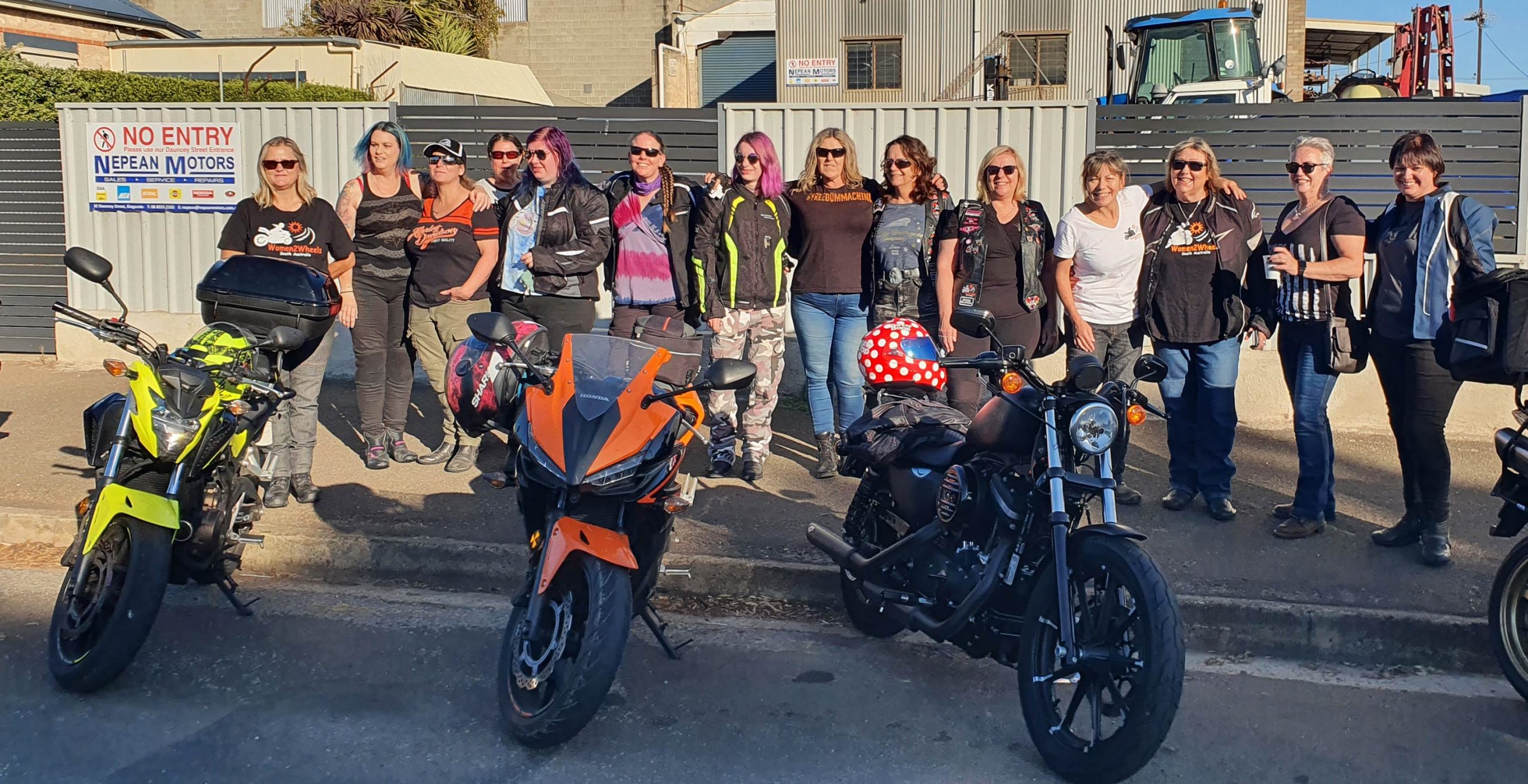 Once on her bike, Toni transforms from, just someone blending into a crowd, to a serious and assertive motorcyclist, fully kitted, visor down, riding her trademark blue, Suzuki GSXF 650, with a custom pink number plate stating Fanny 1. She doesn’t go unnoticed now, as the pack look to her for the ride guidance and everyone knows of Toni and her Fanny; the bike’s nickname makes for many a risky joke.

On the other end of the motorcyclist spectrum, there’s another type of risk within the group; another that is welcomed by the rest of the women. Samantha, in her late forties, is a newly licensed rider with a little Suzuki GSX-R125, the colour that matches her short black hair. Her face is an open book of happiness. ‘I am so excited. I am so nervous, I have to go for a pee again,’ she candidly admits, which draws laughter about this well-known frequent, female-prevalent problem. For Samantha, this is her first serious long-distance ride, her first away trip and first time with a group of female motorcyclists. She’s another genuine article of dedication, the new motorcyclist full of wonder and excitement, about to face all sorts of new experiences. 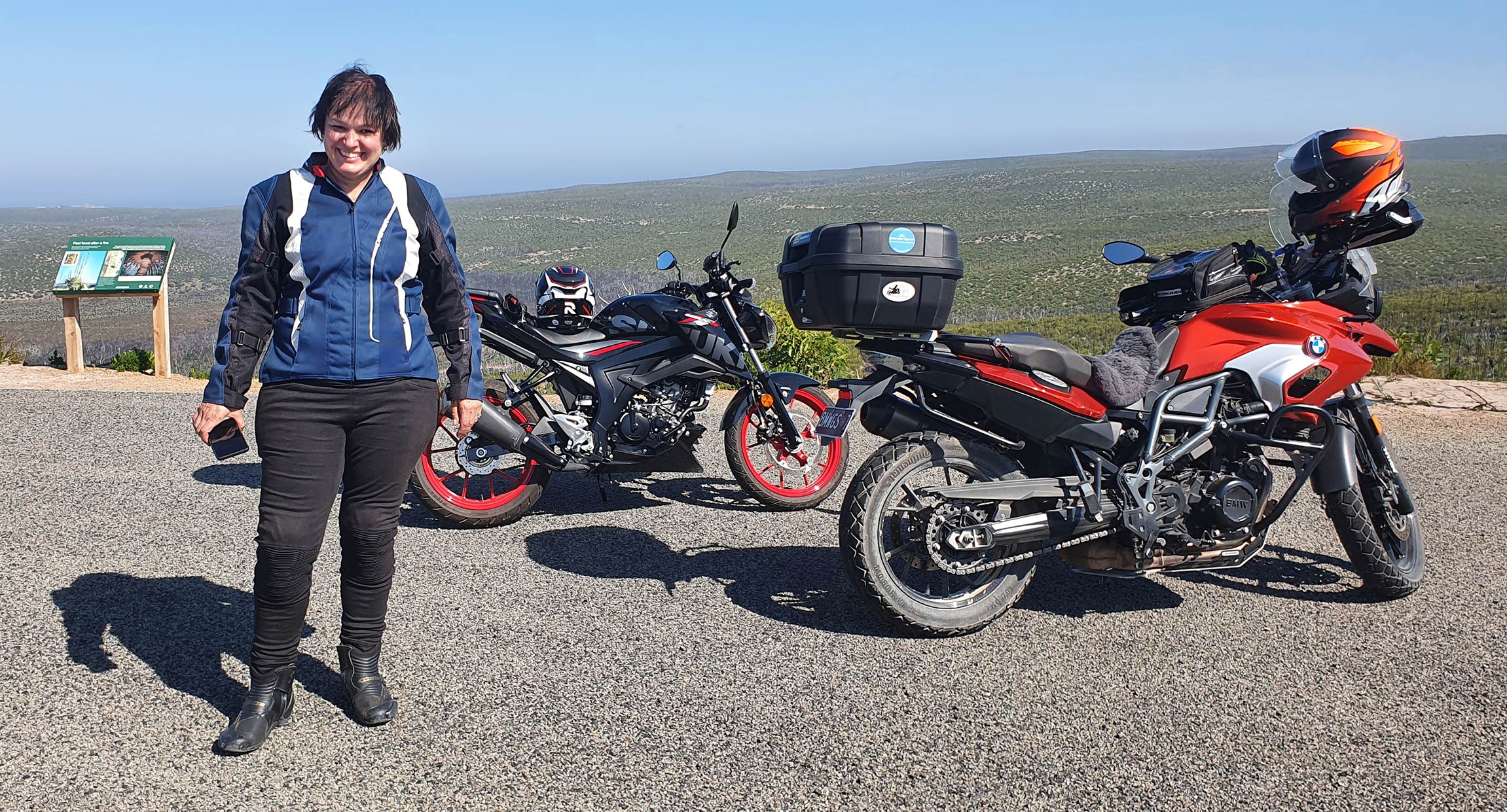 Samantha, can’t keep the smiles away

Samantha appears to be in a constant state of happiness, enthusiastically talking to others in the group, with the conversation steering toward how they found their path into motorcycling. ‘Nobody in the family or friends had anything to do with bikes that I knew of,’ says Samantha. ‘I’d bought some fashionable motorcycle-looking boots, with the ring on the ankle. I loved those boots, but was uncomfortable wearing them out, because I felt nobody would understand why I liked them.’ One day, those boots made sense, when she finally found a missing piece of her life’s jigsaw – a motorcycle; Samantha says she now feels complete.

While Samantha’s path was one of discovery, Toni’s path was very different. No boots involved for her; it was riding pit bikes as a child then buying a 50 CC scooter to commute to work on as a teenager. Once she moved to Adelaide, Toni got into much larger bikes and it was here, she kicked off Women2Wheels. Toni feels, being a woman on a motorcycle, has her in awe with folk from all walks of life, with complete strangers often coming over to chat. ‘I remember a lady about 70, saying, God I wish I were you, as she looked me right in the eyes,’ Toni says.

Ah yes, the dreams of those wishing they were riding and free…

As the weekend progressed further, the bonding was building between all the women as they reflected on their various paths into motorcycling, as well as the blossoming of their personalities. The female side could speak unhindered… the female humour, female motorcycle logic, it was all shining. Well, okay, there was also the female clowns, who had to surf the supermarket aisles using shopping trolleys, pushing others sitting in one or collapsing with laughter at the frequent roadside stops by Samantha to hydrate the vegetation. These were the characteristics of their persona that perhaps do not get seen in daily life. These were their alter egos being freed.

Motorcycling changes lives in wonderful ways and Samantha succinctly put it, as a transformation of, who am I, to, who I am now, meaning each time a leg gets swung over the bike for a day’s outing, she got braver, faster and more confident. The feeling of freedom and strength flowing through her body when donned in motorcycle gear and twisting the throttle. There she was, on Kangaroo Island with her peers, aware her bike was almost the smallest in the group and she’d be punching above her weight to keep up with the big bore Harleys, but it didn’t matter in the slightest, if she trailed a little behind. She was starring in the big event; she was thrilled to be riding.

On the day of the Black Dog Ride, bikes were already lining the streets when the posse of women arrived and parked together. It was a grand moment when helmets were pulled off for all to see and know that women ride bikes and ride they can! Every woman there stood proudly by their bikes while photographers snapped the memorable moment, the picture a headline in the local newspaper. The women, as their alter egos, with super capes flying, were ready to take on the 230 kms round trip, nerves and any insecurities indeterminable.

Samantha with butterflies of excitement hiding under her super cape looked around with eyes shining, absorbing the scene, her heart singing joyously, she was about to experience riding with a large group of about 80 bikes. ‘I knew it would be good, I knew it would be exciting, I knew it would be life changing, but it far exceeded those expectations now I’m living it,’ said Samantha.

As for Toni, the expectations after so much planning for this trip was to share in the love of riding together with her friends, enjoying Kangaroo Island’s roads, a sense of relaxation and time out. Sometimes on the weekend she would mutter, in a loving way, ‘Trying to organise women is like herding cats,’ especially when it came to get them moving, sorting toilet stops or just organising them for meals. Secretly, she loved being Mumma Duck as she gets great satisfaction from doing this. Wind therapy, a great girls weekend out; goal achieved! 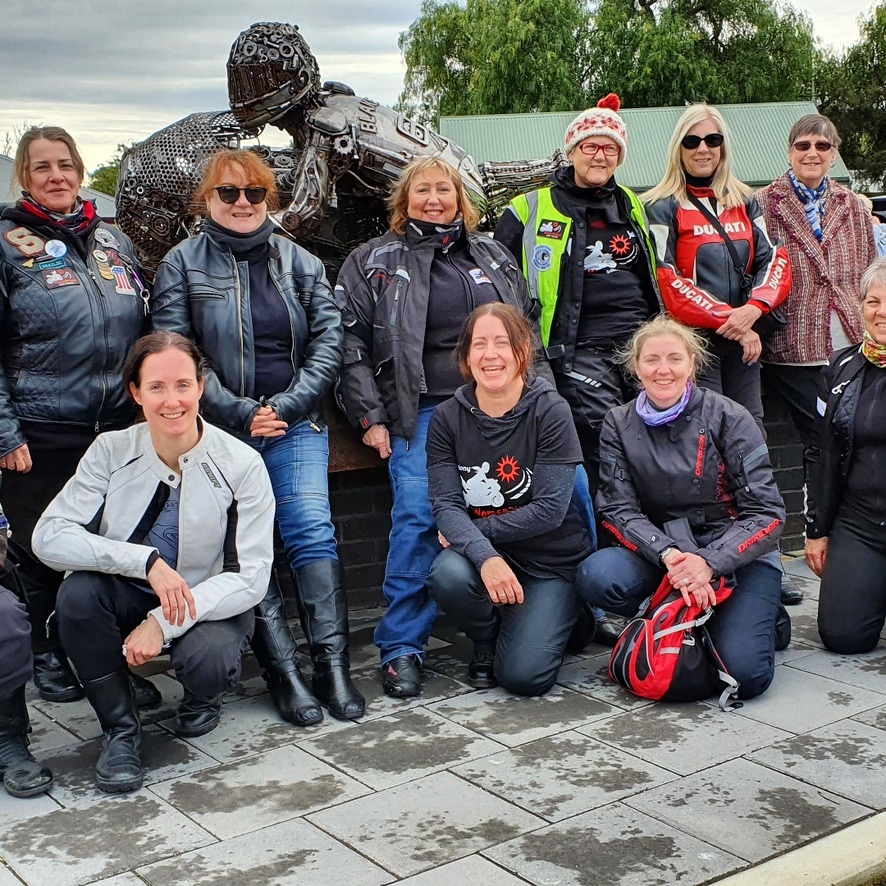 When the ride was done and the women gathered to leave Kangaroo Island for the return to the mainland there was some reflection for all, as the words who I am now, coined by Samantha, resonated with every woman in the group.  It meant something personal and individual to each.  For Samantha and Toni, they had become good friends after starting out as strangers, one the novice, the other the mentor, they now hugged each other goodbye before turning their motorcycles toward different directions home.

Toni and Samantha, who since the Kangaroo Is. adventure has upgraded to a new Suzuki SV 650

They know who they are. They are strong and confident female motorcyclists who knows what it means to ride free.