Who the Hell is this Chick!

In 2018, I took a road trip from Adelaide, South Australia to Alice Springs in the Northern Territory, for the 20th annual Fish’s Memorial Run. I reconnected with a lass I hadn’t seen since the early 90s, when we both lived in The Alice. We’ve stayed in touch and she invited me to join Madam Rider… I’m happy to straddle the ditch with this yarn…

I grew up in rural New Zealand in the 70s, with easy access to the ole farm bike which my sister and I took every opportunity to race around the paddocks. We built jumps to fly over and as with most learners, had the odd, minor crash.  I got my unrestricted licence before heading across the ditch to Australia in 1987, on my big OE. Within a year, I found myself living in Alice Springs where I bought my first road bike, an American model Honda CX500 Custom. It was great for honing my skills, especially with my first 5,000 km round trip to the 1990 Grand Prix at Phillip Island.

Being adventurous, I became involved at the local street drags, a well-monitored get together from the early 90s, where cars and mainly bikes were drag-raced on a barely used section of Yuendumu Road, just north of town. After getting hooked on adrenalin, speed and winning, I decided I was buying a Harley and going drag racing! A magnificent, white 1978 FLH Shovel Harley Davidson came to my attention and the rest is history!

With so much interest and the crowds growing at each meet, it became clear we needed more formal and legal drag racing options for Alice Springs. Negotiations took place to use a section of a rarely used light-plane airstrip; this was on a temporary basis but it was long enough to safely set up an eighth mile drag strip, prepared at the beginning of the day and packed away at the end. It was just what I wanted and where I met my future husband, Steve.

Steve and I lined up together, both on Harleys. He was wondering, ‘Who the hell is this chick on an old, kick-start Harley?’ I won that race, but because the timing gear defected, we had to do a re-run; he won, which was kinda ok as he went on to win that race meet. 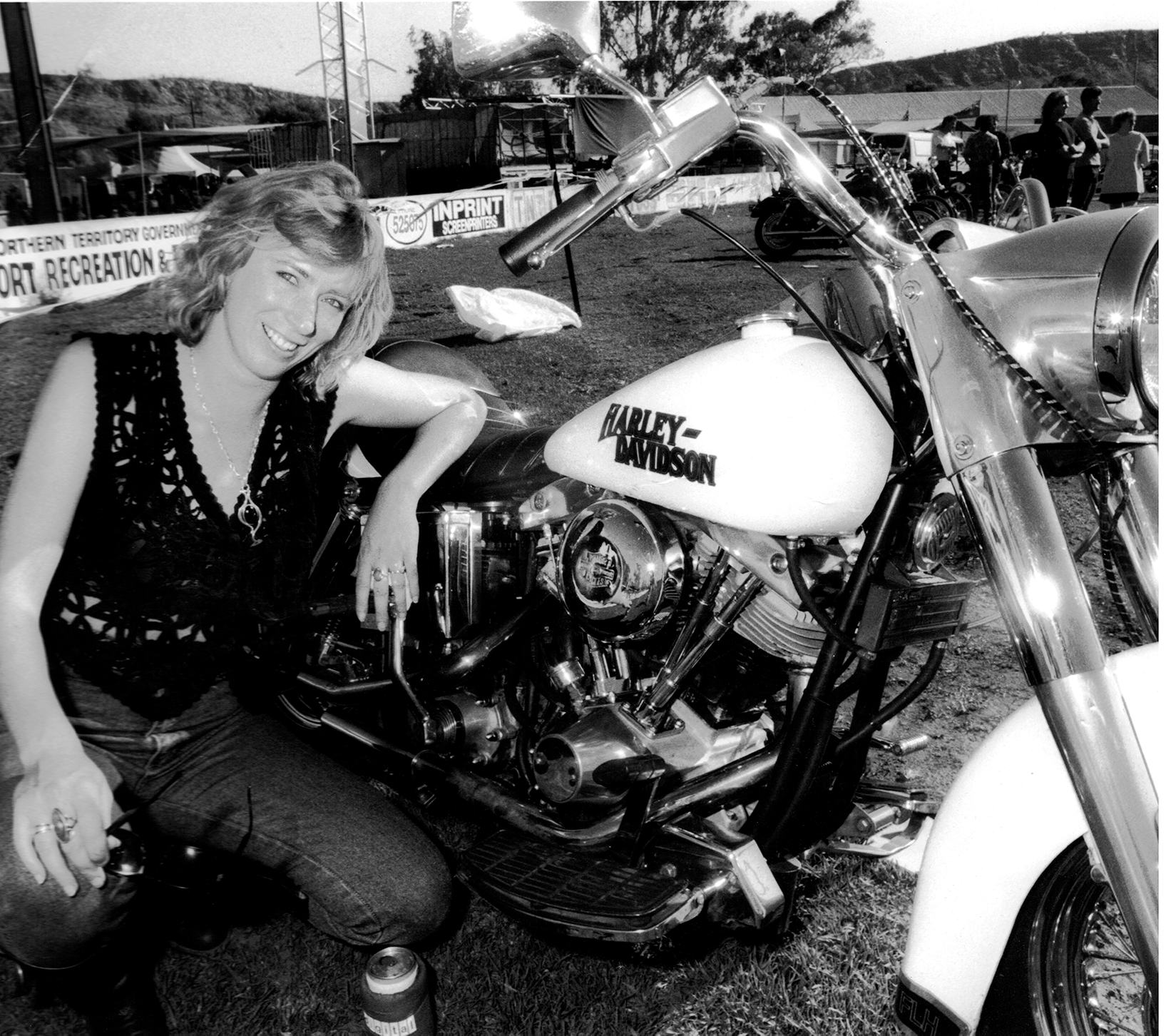 We later moved to Darwin, in the Top End of the Northern Territory, where I upgraded to a 1981 FLH Harley Davidson and went along to the full quarter mile drags  at the local Hidden Valley Drag Strip. My fastest time while competing in the 1996 NT Titles was 13.47 seconds.

My need for speed was so strong I purchased a 1996 Suzuki Bandit 1200; it served my more sedate daily commute and could be unleashed to fulfil my drag racing desires. I really loved this sport and became rather good at it. After many club wins and a couple of NT street bike titles under my belt, I upgraded again to a Suzuki drag bike based on the 1981 Katana 1100, which I still own today. Until 2009, we rode the 3,000 km round trip from Darwin to The Alice twice a year, to race and party Alice Springs style. 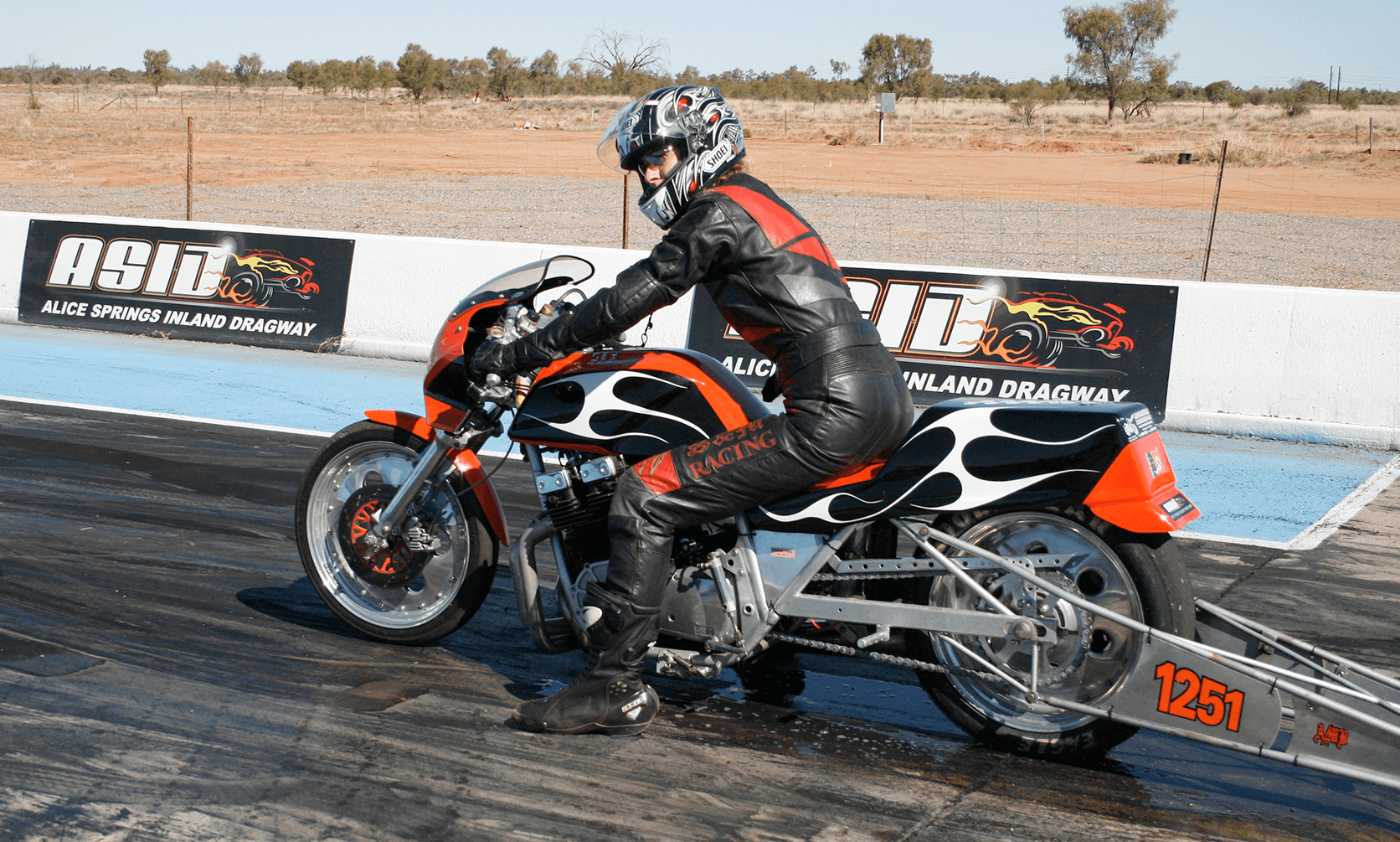 In 2003, Steve and I were fortunate when racing friends took our bikes to NZ for the February race season in the North Island. I had a whoopsie during my first run at Meremere, finishing me off for the day with a broken bike and a broken toe! A chap by the name of Athol Williams emerged from the crowd to offer help; he took pity on me, carting us back to his place to fix my broken bike. For those who don’t follow drag racing, Athol is best known as The Flying Kiwi… his love of drag racing started in the 70s, though it took three years of racing a Top Fuel bike to set his record 238.51 mph at the 2009 Sydney Dragway Nitro Championships.

After my spill at Meremere, I was tentative about Masterton but managed to get it together for my first run. By the end of the meet, I’d beaten 15 blokes to take out the Modified Bike bracket!

Motivated, Steve and I were instrumental in reigniting the Trans-Tasman Drag Bike Challenge, first run in 1993, when a crew of Queenslanders came to NZ. With five Territory mates, we descended upon New Zealand as the Outback Seven in 2005 and 2008; the Kiwis reciprocated in 2006 and 2009. 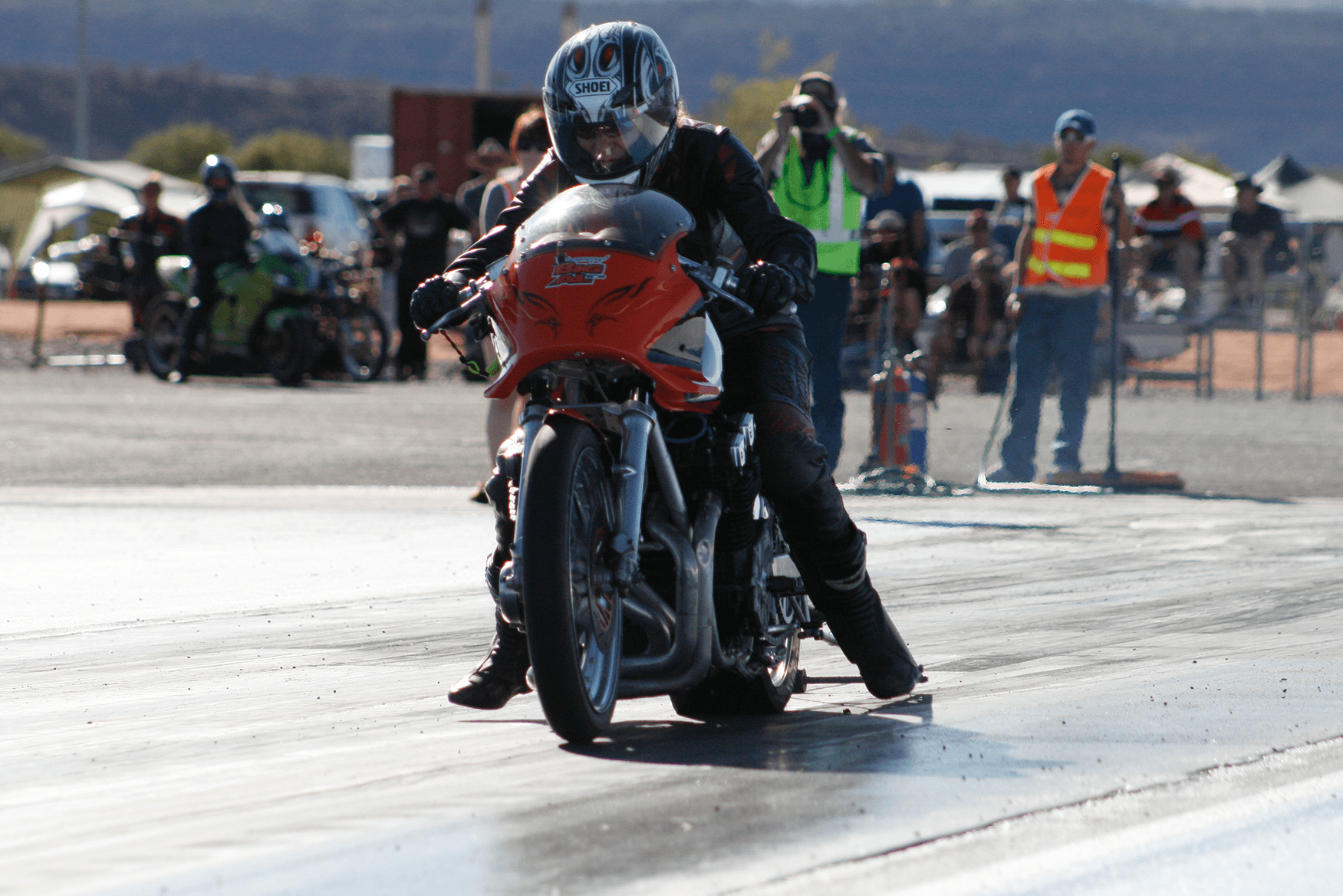 Thirty plus years of motorcycling! Why drag racing?

The thrill and adrenaline are mind-blowingly addictive, the camaraderie within the bike crew like nothing else. This sums it up for me: ‘Faster, faster, faster, until the thrill of speed overcomes the fear of death.’[1]

If you see me at a NZ event on my 2006 Triumph Thruxton, come over and say g’day… 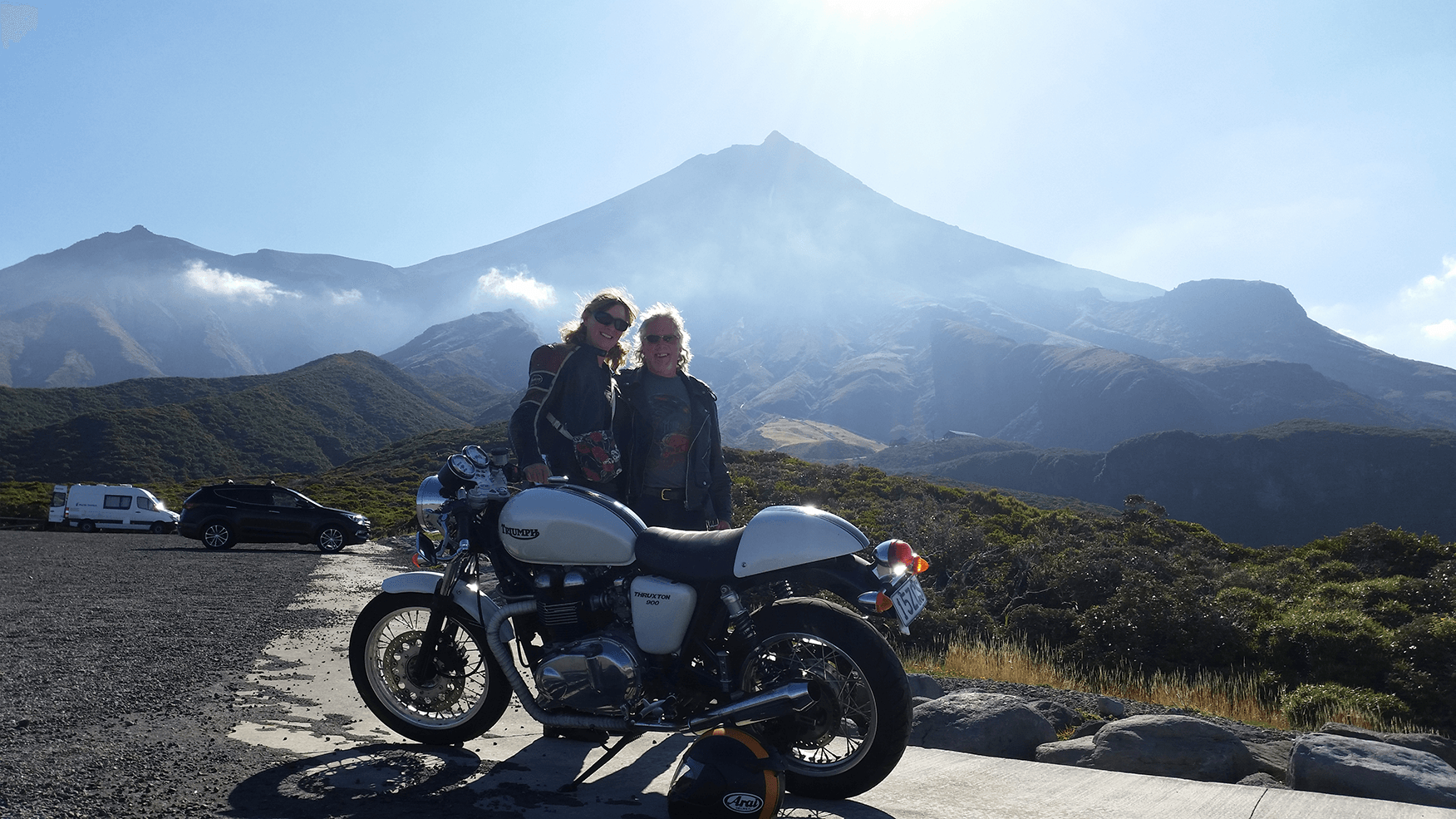 Margie and Steve at Mt Taranaki 2020

Email through your own adventurous tales, reviews of products and general feedback, as we’d love to hear from you… contact us here