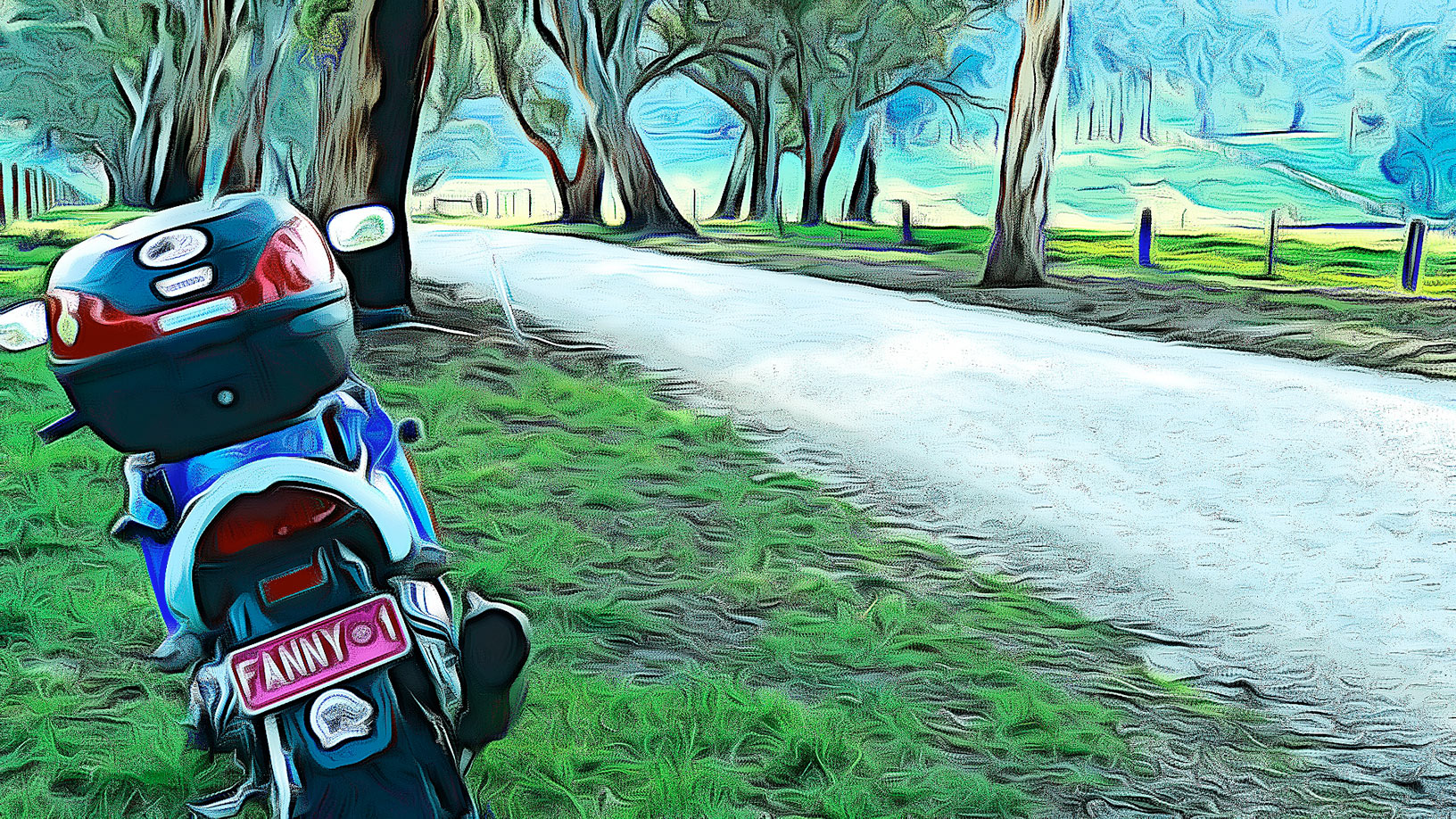 Toni is a cheerful, outgoing, beautifully curvaceous, 168cm (5’6”) tall woman, matured around the 60th year, living in Adelaide, who loves to ride. In fact, she loves riding so much, she owns two bikes… a 2008 Suzuki GSX 650F and a 2012 Honda VFR 800. She is co-founder of the Facebook group, Women 2 Wheels, South Australia, leads an extremely busy work-family life and rides daily. 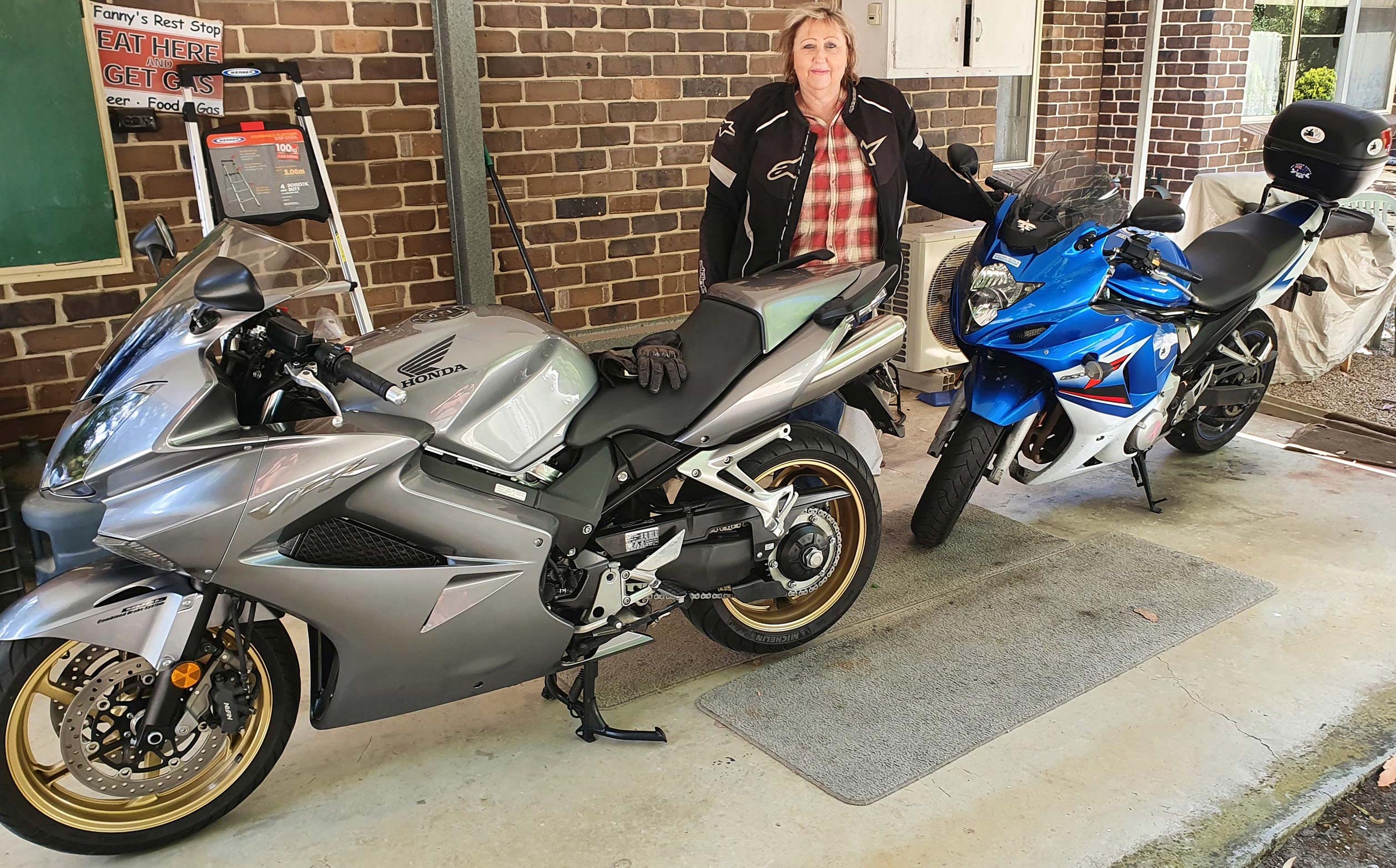 For this edition, I wanted a reader’s take for the bike review; Toni having two different brand bikes, in the sports touring category, was perfect. Being older models are a bonus, placing them in a very affordable price bracket, yet still boasting terrific reputations as reliable all-rounders, perfect for upgrading from the LAMS market, without getting into the insane power bracket. Even with the models around 2012, you’ve got loads of options around the $5K mark for the Suzuki; $8K for the Honda.

Toni has ridden for many years, starting with minibikes as a kid, then on and off with road bikes since 1992, becoming a regular rider about 15 years back.

She purchased a 2008 Suzuki GSX 650F with 10,000 km on the clock, in 2012, which she named Fanny. Toni had noticed the F on the tank and wondered what that stood for… then Fanny sprung to mind, along with her favourite song Free Bird, by Lynyrd Skynyrd, so… Fanny Free Bird she became, aka Fanny, for short. 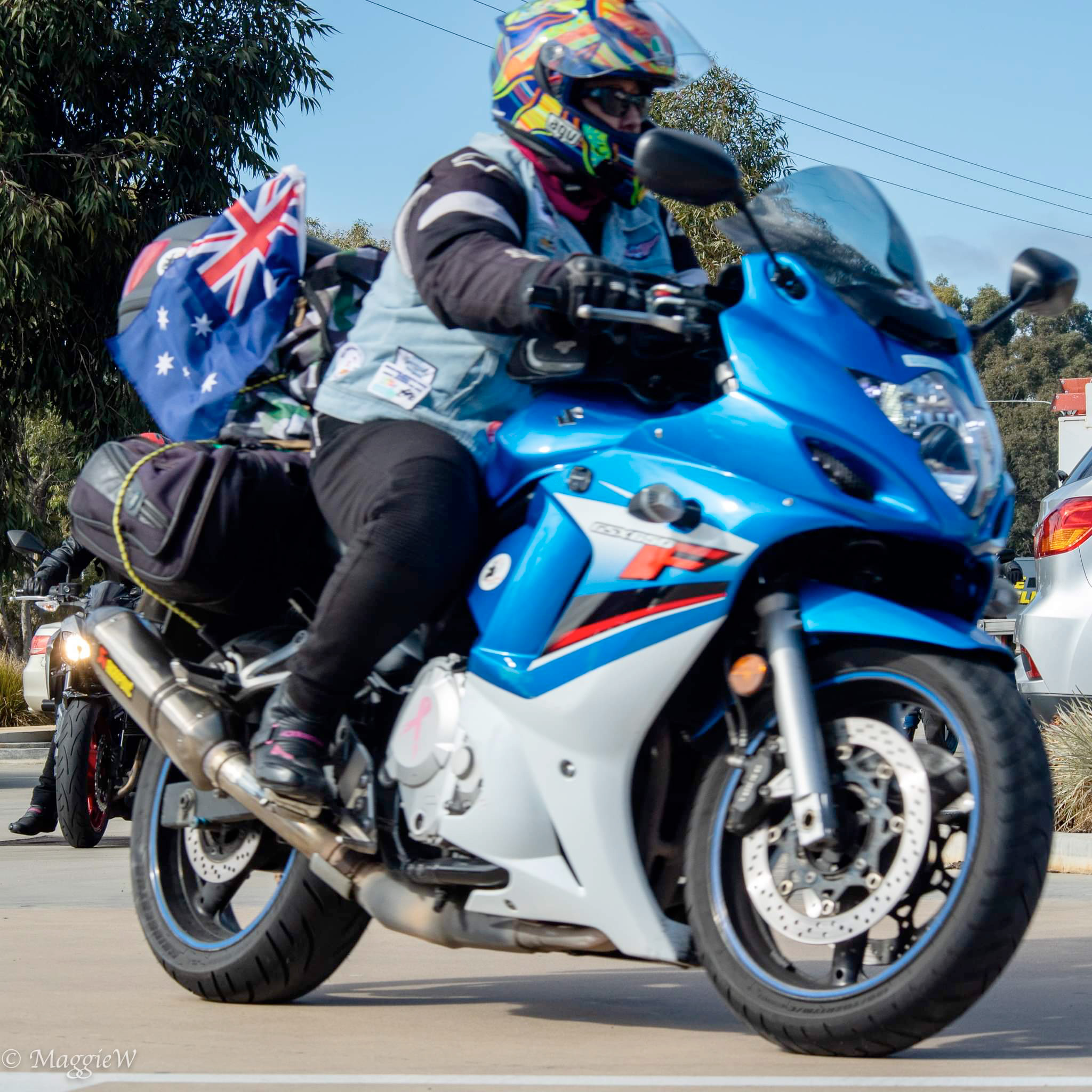 Toni’s since put over 100,000 km on her! Apart from riding every day commuting from the Adelaide hills, into the city, Fanny has been ridden on many road trips. Toni trusts only Joe, of Mototech services, Magill, SA to service her Fanny, so she’s well-loved and maintained, which gives Toni confidence in her reliability.

She boasts an aftermarket performance product, the Akrapovič exhaust system and permanent accessories of the Ventura, Astro Top-Box, the perfect all weather-proof compartment for everyday use and some heated handgrips. 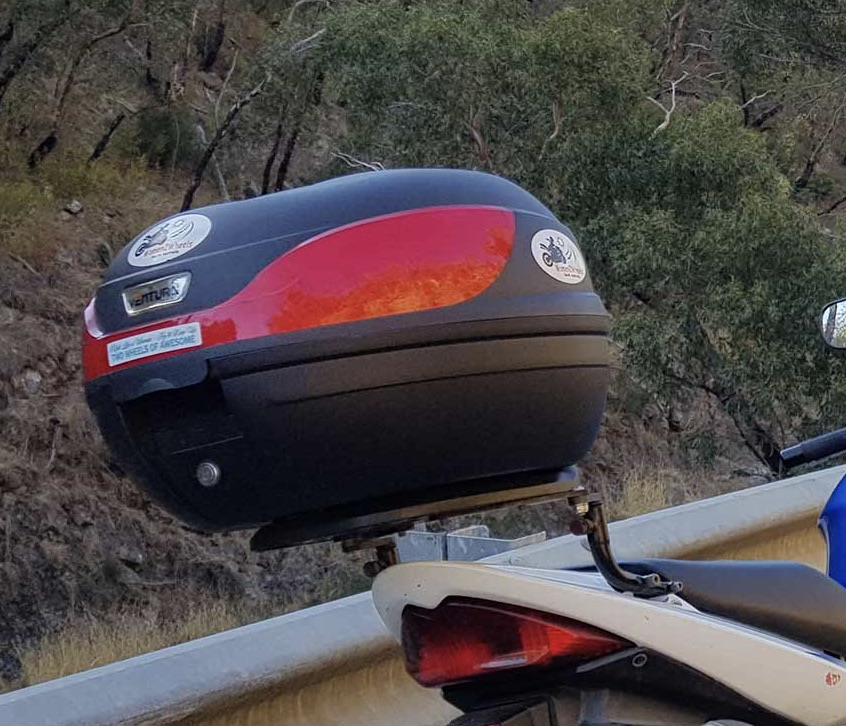 Fanny looks pretty damn schmicko, with her predominantly blue bod and the white with red striping, colour combination; the very deliberate, sharp lines on the fairings help pull off that sporty look. There’re black mags with blue rims and a low windscreen… adequately deflecting airflow over the rider. The instrument cluster is well defined, with two tripmeters, handy gear position number, clock, speed, revs, fuel gauge, and easy access for inserting the key; when it all lights up at night, the colours look really pretty. 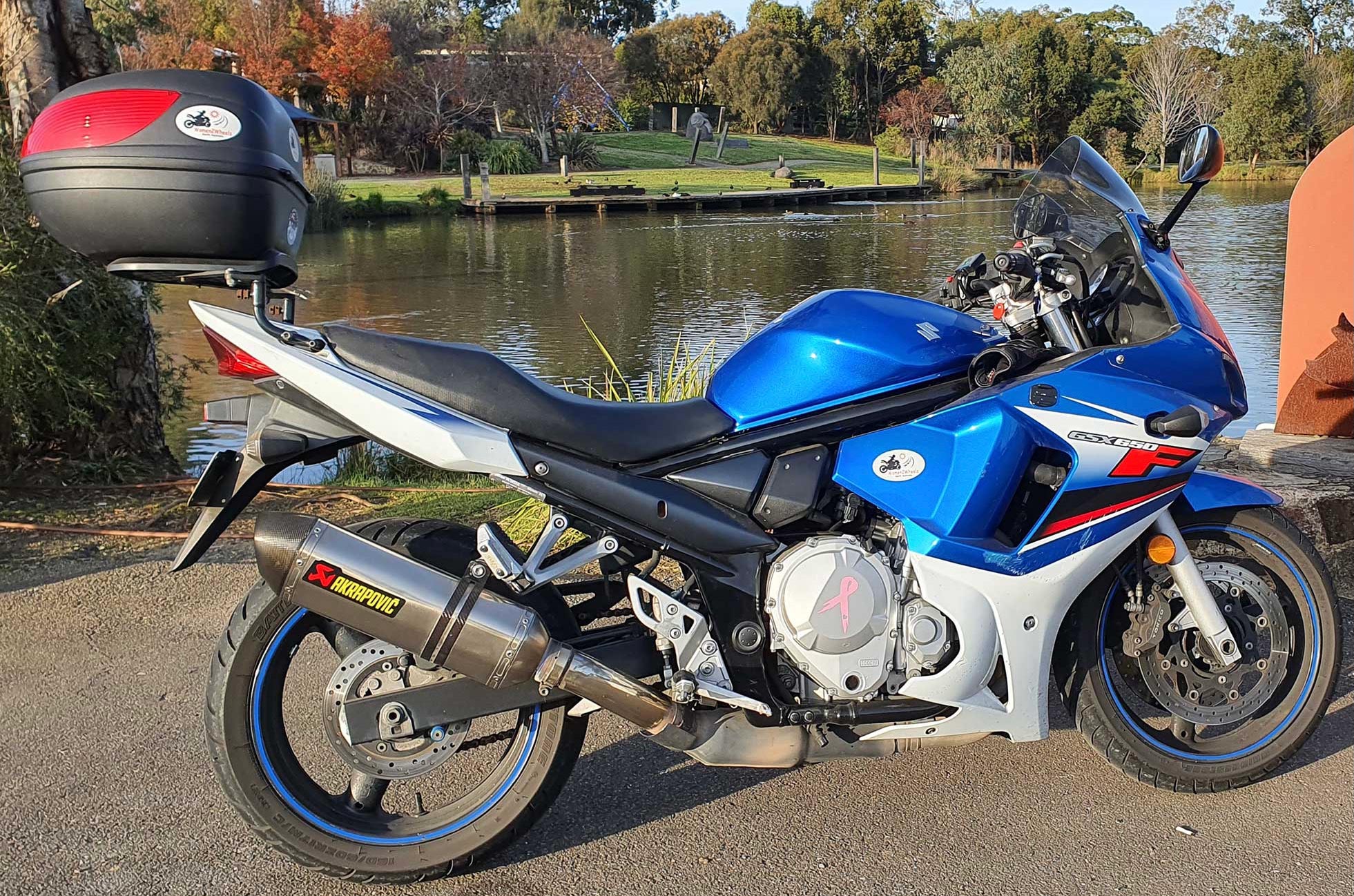 Toni reckons the natural handlebar layout is perfect for her; with the upright seating position, there’s minimal weight on her shoulders and wrists. She is flat-footed when at rest, which is a major feature to consider when seeking to purchase a bike. Fanny’s semi-slim shape disguises the comfort of the supple seat and low footpeg-to-seat combination; there’s even ample room to move without banging knees into the fairing. The sculpted tank and fairing enable Toni’s legs to nuzzle in comfortably, giving that important overall snug connection, riding as one. The ergonomically designed hand controls allow for easy reach and exceptional grip leverage, for nimble hand movements through the inner-city madness, highway riding, or into the twisties; with all those combined comforts, Fanny’s set for all-day riding. 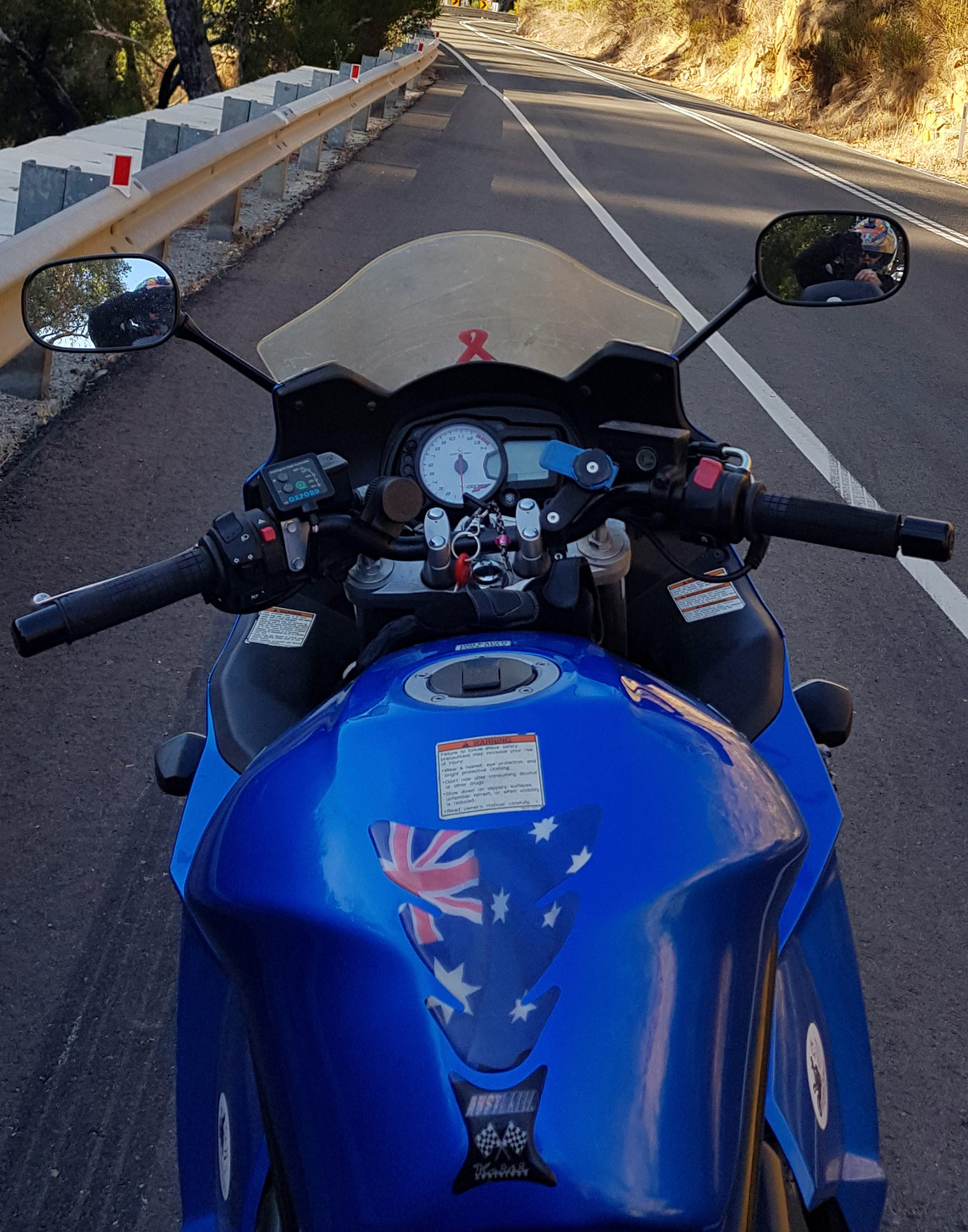 Fanny’s heart is the flexible, liquid-cooled, transverse in-line four, 656 cc engine, which delivers a smooth chain-driven ride without noticeable vibration. Her aftermarket exhaust provides additional strength in performance throughout the rev range. The fairing effectively assists to protect the legs from engine heat which is a bonus in the extreme heat of the South Australian summers.

Toni loves putting Fanny through her paces in the twisties; with six smooth gears, she’s fairly agile, keeps steady, grounded and on course. The front end feels a bit heavy though and Toni said it feels taut when hooting through the tighter turns, so needs to work it a bit, or slow it down a tad. It’s a total buzz though when keen to lean, easily removing any remaining chicken strips, with help from the 130mm ground clearance and accurately positioned footpegs; there’s plenty of cornering clearance, before any chance of scraping. 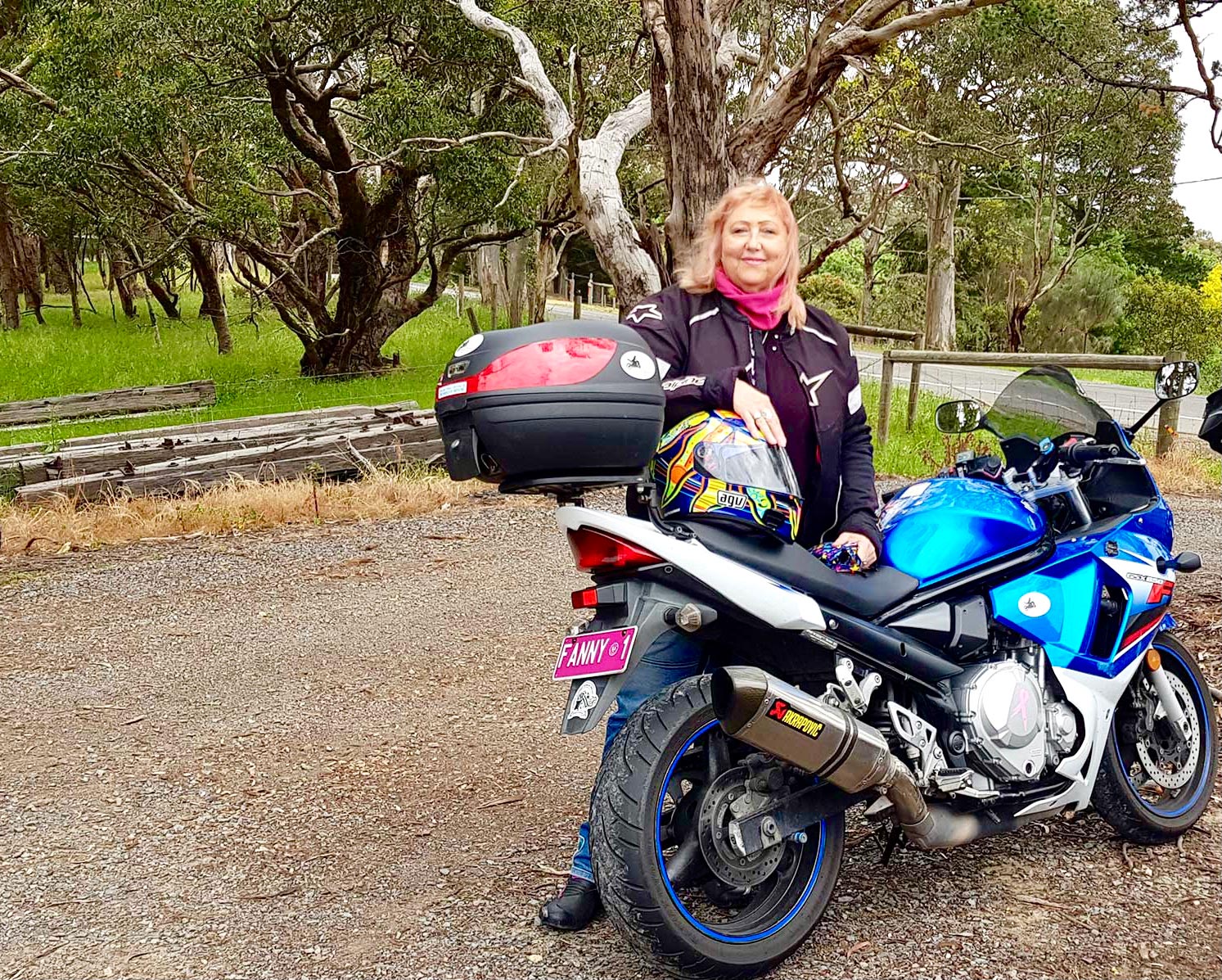 Sometimes feels a tad heavy on the front end…

The single-shock, rear suspension does a fine job smoothing those bumps and is easily adjusted by using the spanner wrench, from the functional toolkit tucked under the seat; there’s a seven-way adjustment for preload and rebound. Also under the seat are two helmet holders; a sinch to lock up and walk away.

Overall throttle response is precise with power when needed, way more grunt than the LAMS version, comfortable at 130 kmph, with much more to give on the long outback trips. There’s great fuel economy with the 19 L tank, but with the aftermarket exhaust, Fanny sucks through her fuel, a bit quicker. 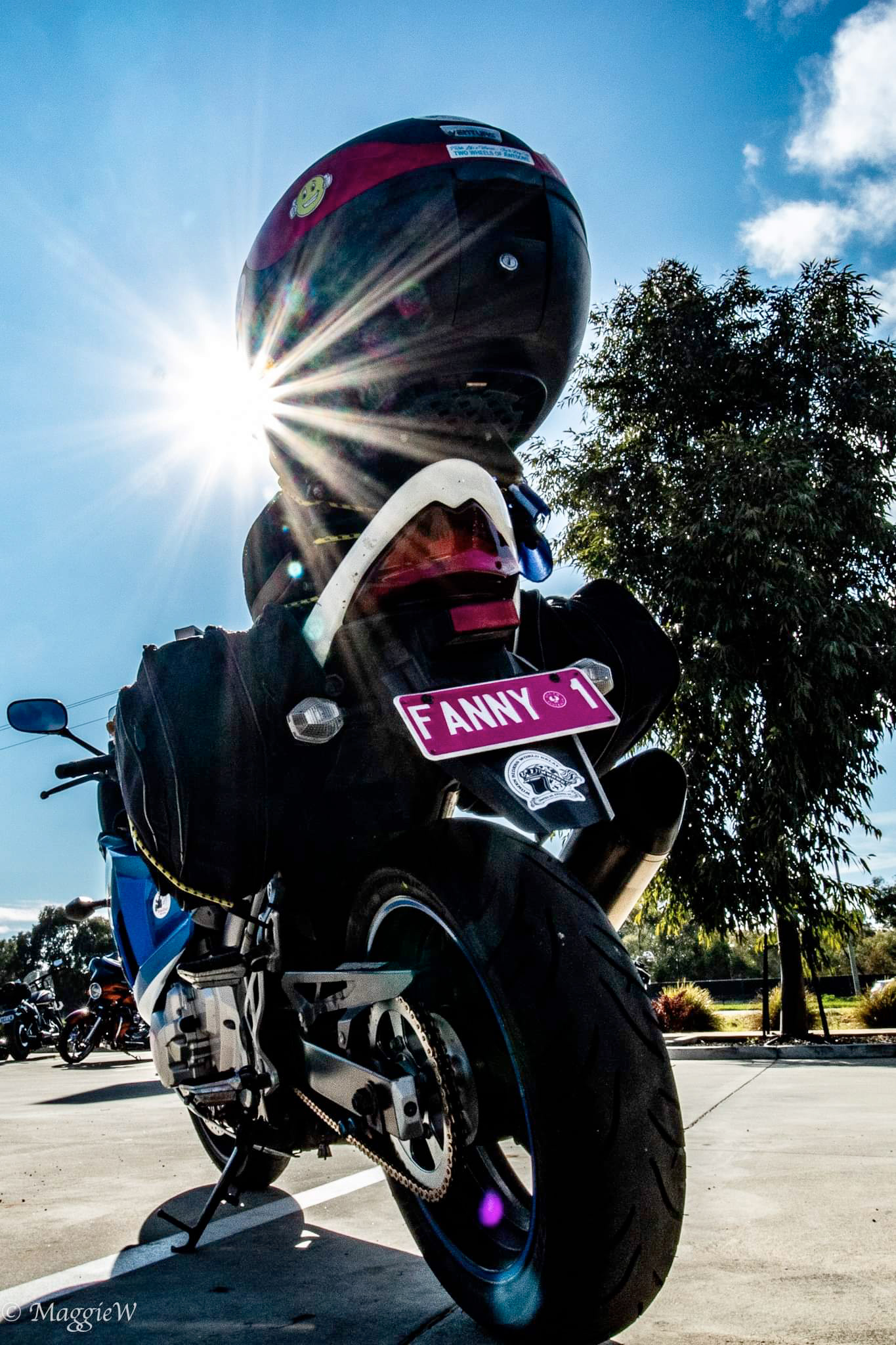 Oi there… you checkin’ out my butt? Photo credit MaggieW

Toni has lingering shoulder and neck injuries, which affect her comfort levels at times, but they vanish when riding Fanny. Although the weight took time to get used to, experiencing a few small mishaps initially, Toni’s very confident with Fanny now; suggesting the bike is suited for a person with strength.

Toni purchased the 2012 Honda VFR 800 in August 2020 with 34,000 km in immaculate condition. Fanny was getting some high kilometres up and another Suzuki GSX 650F model, with low kilometres was impossible to find at the time, so Toni was prepared to sell Fanny, once something newer, with low kilometres and better reliability for long trips, was found. The Honda VFR800 and the Suzuki GSX 650F are in the same sport touring category, so Toni thought they’d be very similar. 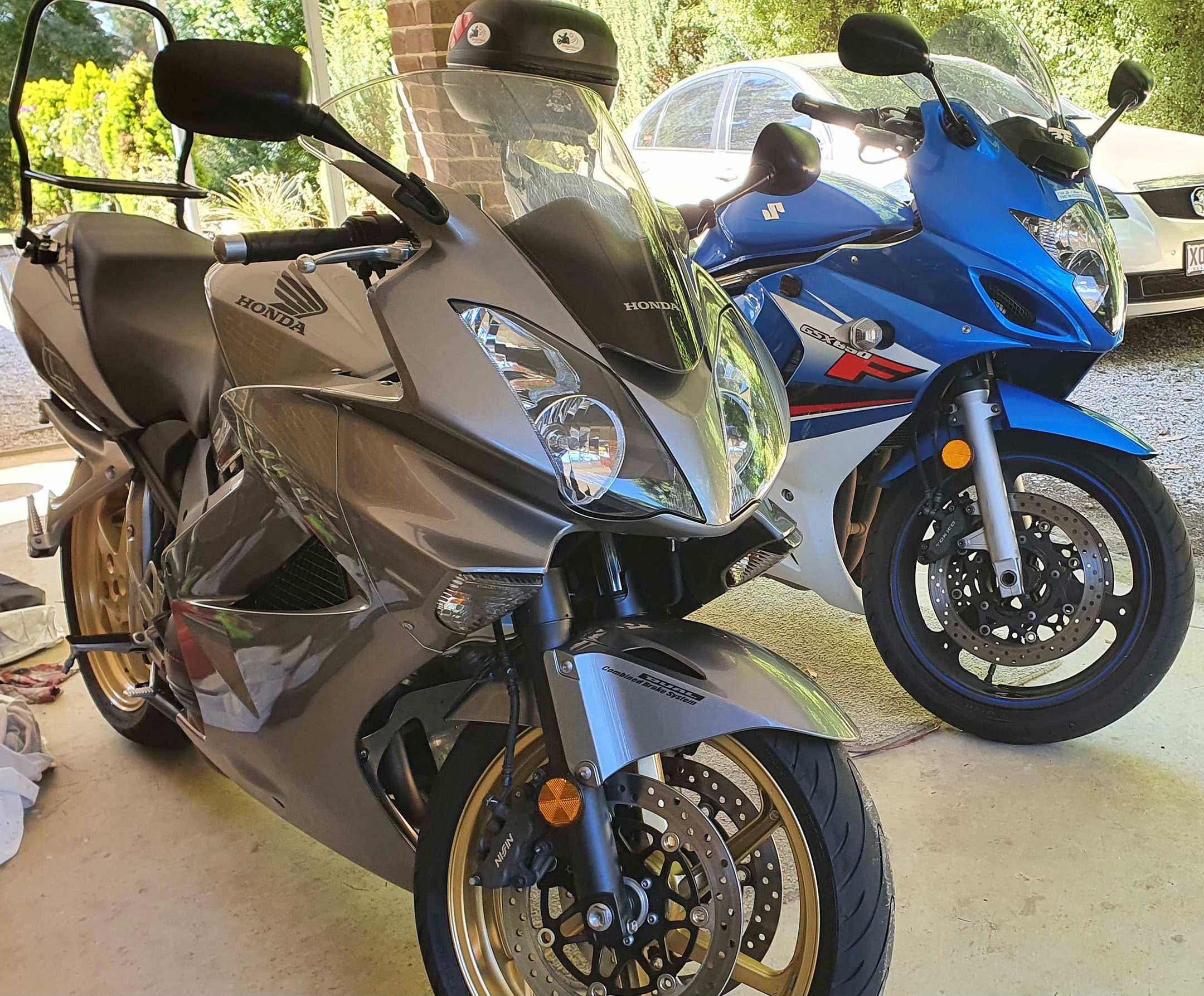 Choices, choices… too many choices

To give the Honda a decent trial, Toni rode it to Echuca, a country town in Victoria, about 700 km from her home. Instead of taking just one day to get there, as with Fanny, it took her two days, because Toni found herself pulling off the road more often, with her comfort level seriously compromised. The seating position leant her quite a way forwards, so Toni experienced aching wrists and hips and overall was uncomfortable.

In fairness to the comparison with the Suzuki, Toni has not ridden the Honda much, because she feels after 100 km she needs to get off to rest. She ended up naming him Thor because, “He made my thighs thor”, Toni explains, due to getting sore thighs from the wider and harder seat. 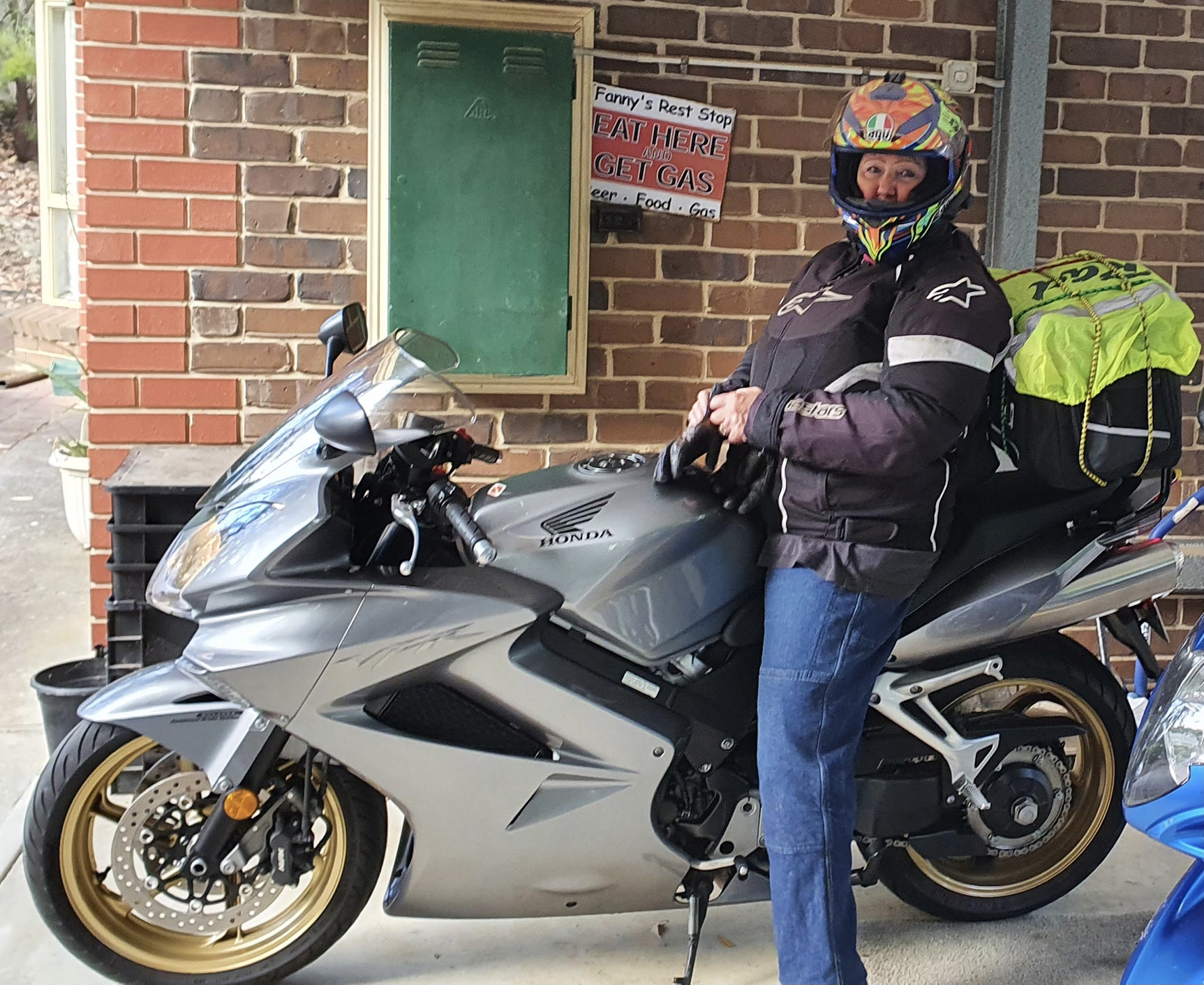 Packed up for test ride to Echuca, in rural Victoria

Let’s see what he’s about…

Thor, a 2012 Honda VFR 800 is a sophisticated fuel ejected V4, four-stroke engine, with an ultra-smooth six-speed, gearbox and together they work well to provide a strong drive. He’s a real beaut lookin’ beast showing off a dark silver bod, with gold wheels, headlights moulded into the front fairing, each side of the windscreen… kinda space-age look. He’s chain driven with twin exhausts coming up high underneath the rear seat. 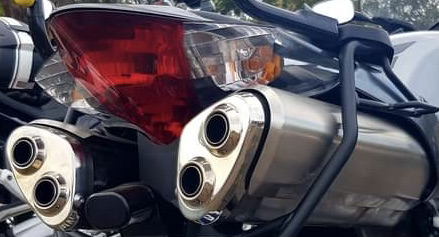 The clutch set-up is a three-stage damper, which should make for ease of shifting, however, Toni compares Fanny to Thor like getting out of an auto car into a manual and he feels a bit jerky until she’s used to him. Toni admits this may be due to her riding Fanny more and not an issue with the bike itself. 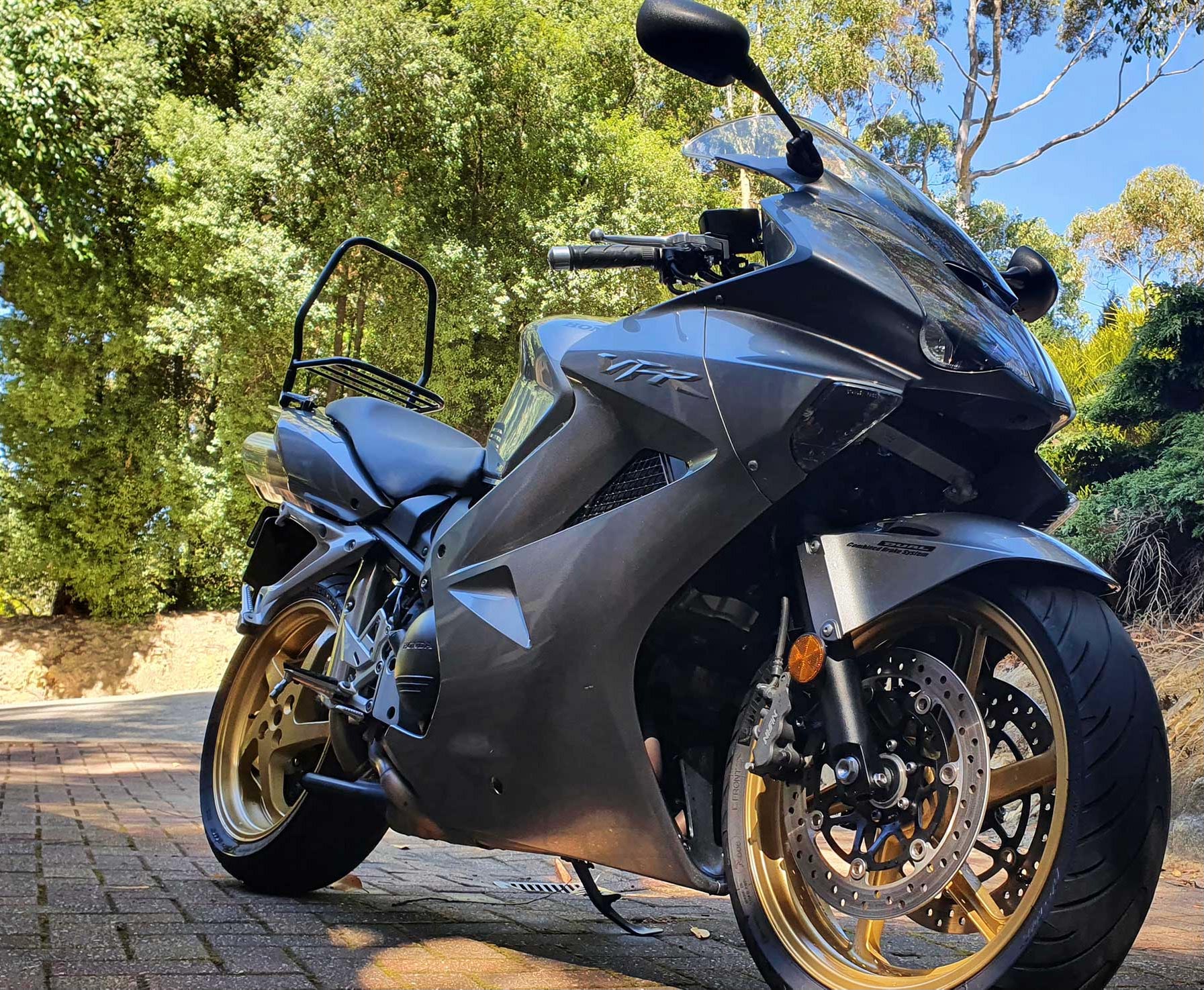 With a 22 L fuel tank, there’s plenty of range, touring easily in excess of 300 km.  There’s a decent amount of legroom for both rider and pillion and Toni easily reaches the ground with a solid stance. There’s room for a top box and panniers, with the structure in place to easily install. 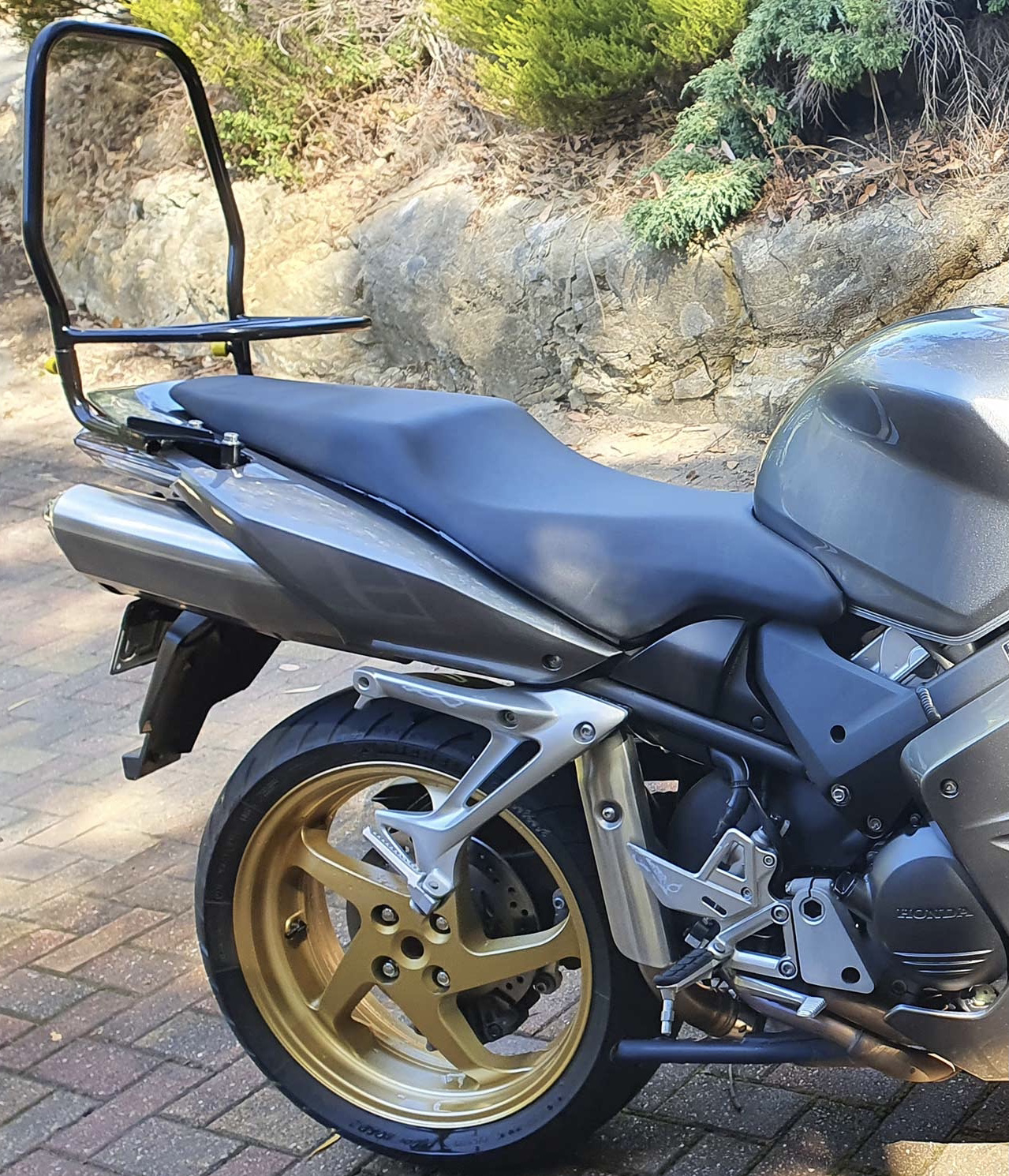 Plenty of cargo area for longer road trips; gold mags for a clean and modern appearance

Assertive and dependable, Thor tackles his responsibilities with strong, technical expertise and is certainly no lightweight in the sports tourer category. He has plenty of power to get into and out of scrapes, holds his own on the highways and through the hills and is a reliable commuter. The Honda VFR 800 is well respected as a credible all-rounder.

Thor is a bit spesh with his own immobiliser, the Honda Ignition Security System, controlling the start-up via a computerised key. The instrument cluster is basic, clock, speed, revs, temperature gauge and Toni being used to Fanny reminding her what gear she’s in, misses that function on Thor. The windscreen offers protection against the elements and the seat has generous padding, though a bit too wide for Toni’s preferred seating position. 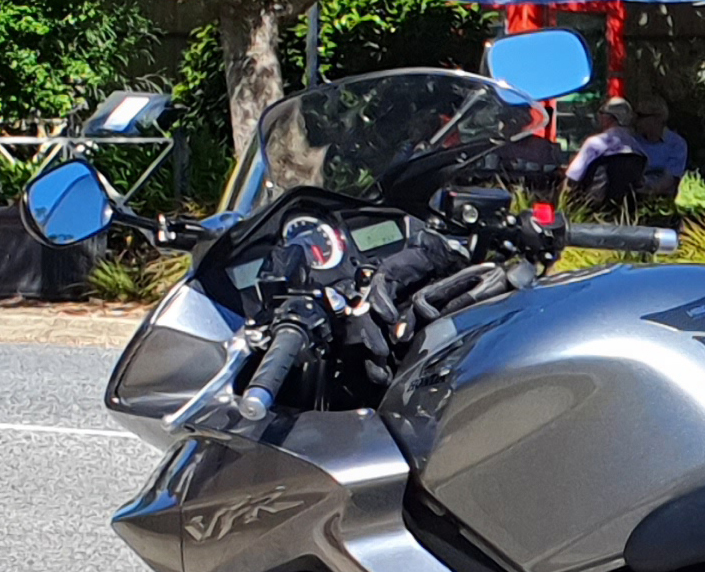 Thor’s  DCBS (Dual Combined Brake System, is different to ABS, however, the kick-ass performance will provide an aggressive delivery of braking force, well and truly sufficient for riders of all skill levels. Toni relies on this system, feeling completely secure with its capabilities, as she confidently rides the steep inclines. The brake set-up explained, in layman’s terms:

For information regarding the rating system for this bike, including, engine performance, reliability, etc., rated by riders:

Some of the differences Toni noticed between Fanny and Thor:

The main choice of Toni choosing Fanny as the favourite was due to the different comfort level when she rides Thor. Possibly if the seat was restructured and made slimmer for her and the handlebars pulled back to mirror the seating position of Fanny, then Thor would be able to give her, his best too. 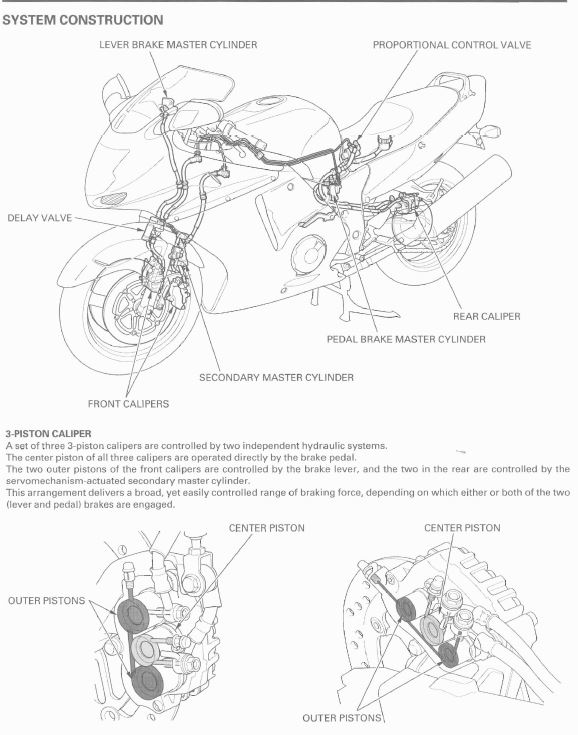 Both bikes are well proven terrific all-rounders for performance and reliability in the sports tourer category and like any bike, comfort for the purpose you are wanting it for is a top consideration. Also knowing there are so many aftermarket accessories that can be purchased for most bikes for adjustments to be made can help in the choice of finding a bike that suits you.

The hierarchy I use as a guide when choosing anything for my bike or personal protective gear is:

A shout out to Fanny’s mechanic… 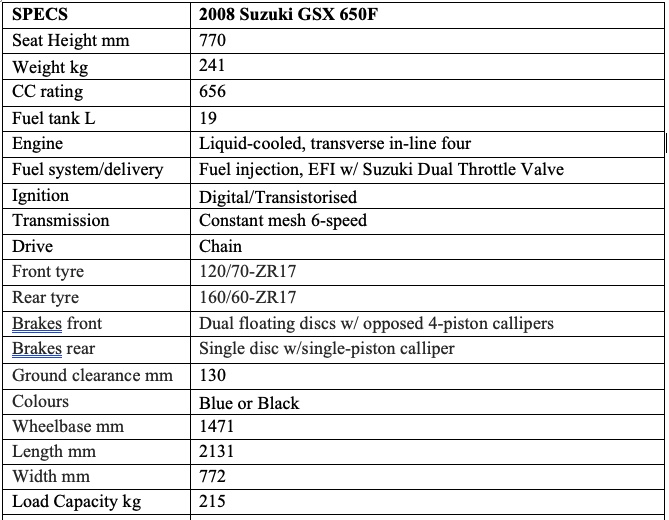 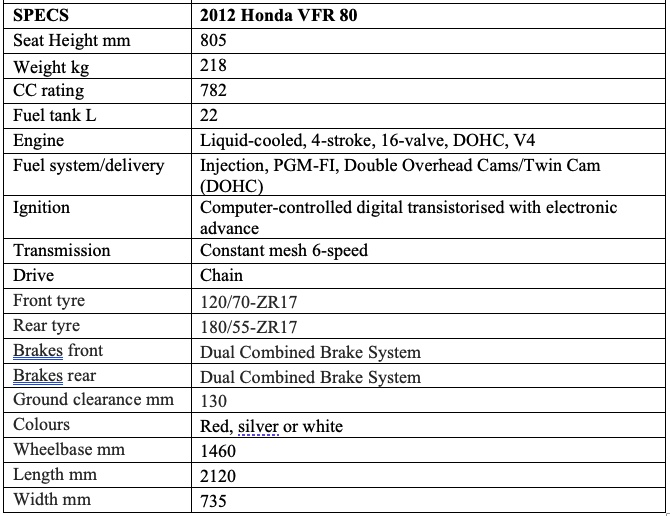