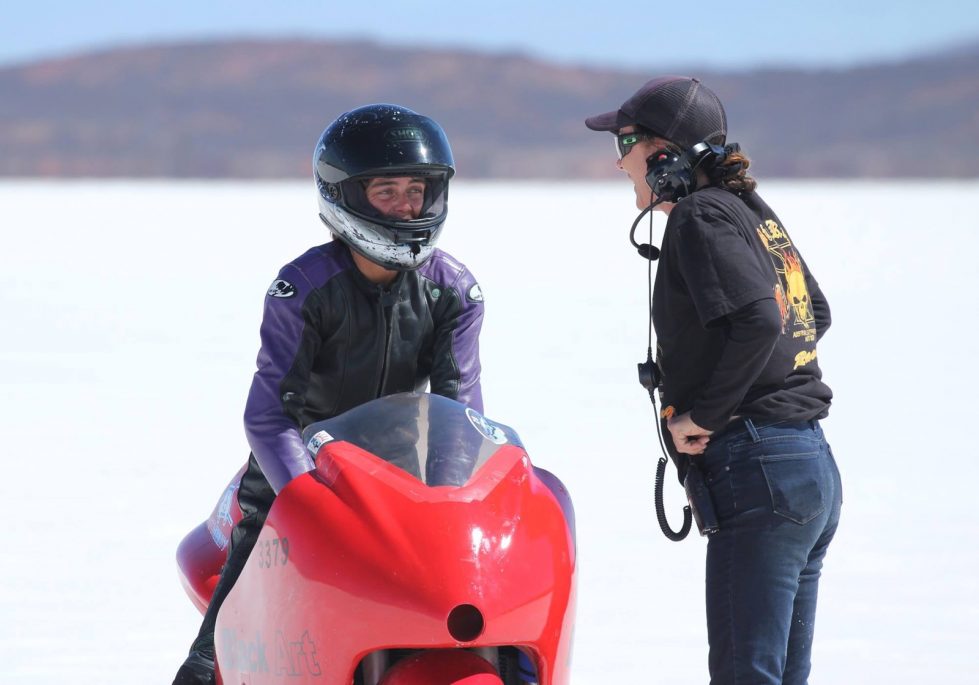 The book cover showed the back of a woman clad in motorcycle leathers, sitting astride a red bike that was clearly built for speed, salt crystals were clinging like crusted diamonds to her rear tyre. Her helmeted head was turned slightly, suggesting she was gazing at the distant horizon across the stark-white salt lake, perhaps focusing on the milestone markers that were mere dots in the distance. 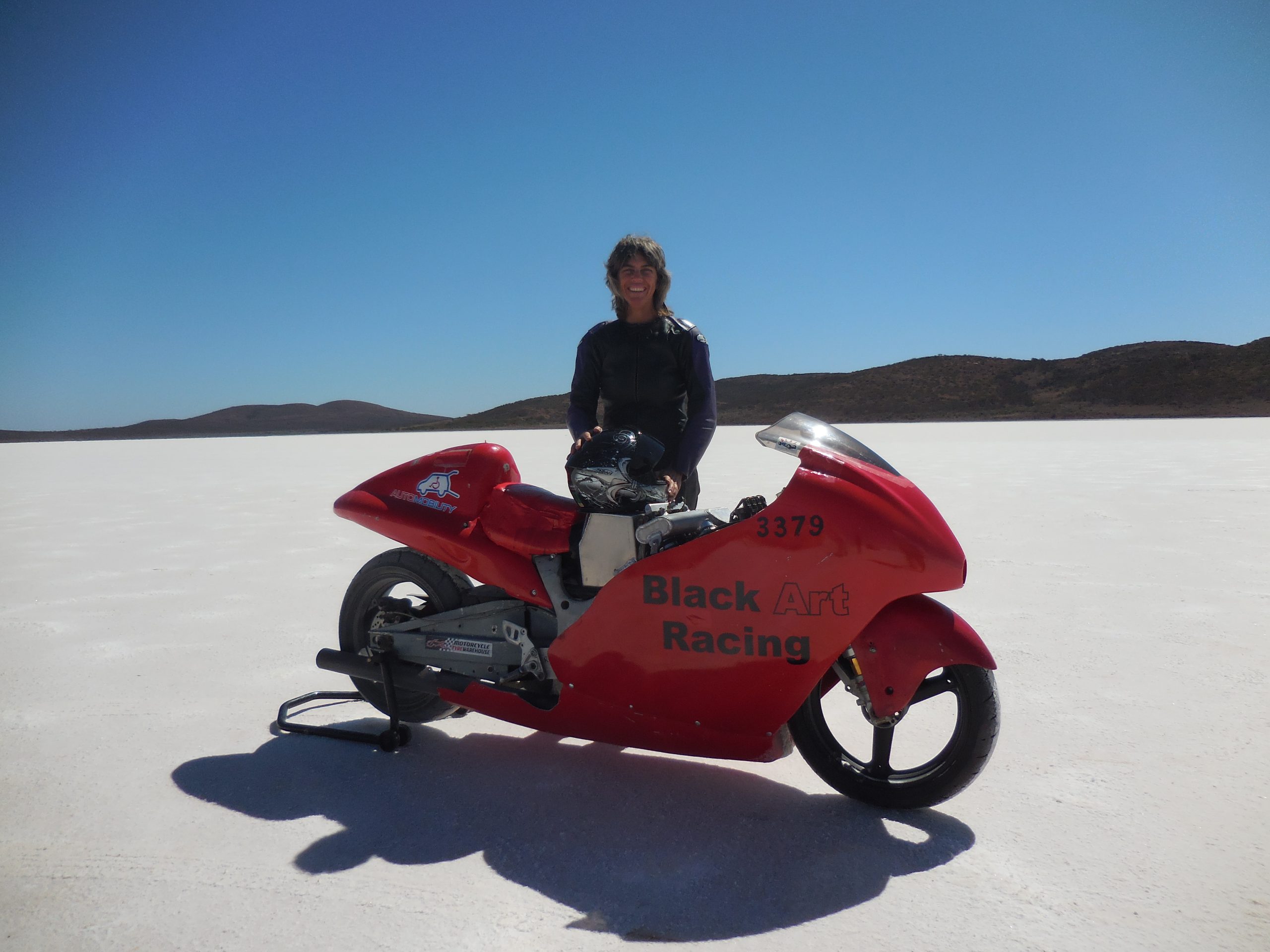 I met Kim Krebs a few years ago at a book launch for Fast Women, a book about pioneering Australian women motorcyclists, by Sally-Anne Fowles. I stared down at the front cover of my newly-purchased copy and realised I was queuing like a teen for Kim’s autograph. She was immortalised in that photo and yet completely tangible because there she was, in front of me, smiling and radiating a genuine warmth. After reading the book, I understood her love of racing. ‘We go stupidly fast,’ Kim quips, about the focus of achieving a record speed within the time required.

Since then, I have had the fortune of getting to know Kim. We were both guests on Moto Chat in Adelaide, South Australia, a local radio show dedicated to motorcycling interests. Listening to the talk about time trials, chasing down speeds above 244 mph[1] while Kim, small and athletic in stature, is tucked behind the screen of a screaming, turbo-charged motorcycle with over 300 horsepower, was captivating. While the radio hosts chortled away about her records, machines and runs, I wondered about the human element that even makes this happen. What about the woman? So, we sat down over a coffee in Adelaide, to chat about her.

Kim grew up on a farm in New South Wales, with a loving and happy family. Her parents encouraged Kim and her siblings to challenge themselves; to have a go. Importantly, they never compartmentalised roles by saying boys and girls were only allowed to do certain activities. Kim’s introduction to bikes was made through an uncle, a mechanic who was contracted to maintain the pit bikes for a travelling circus. Dear uncle seized the opportunity to get his young nieces and nephews to the circus, not to watch the show, but to have a sneaky ride on the pit bikes. Young Kim had never been on a bike, but she liked what she experienced, even when she couldn’t remember how to shut off the throttle as she headed for a fence. 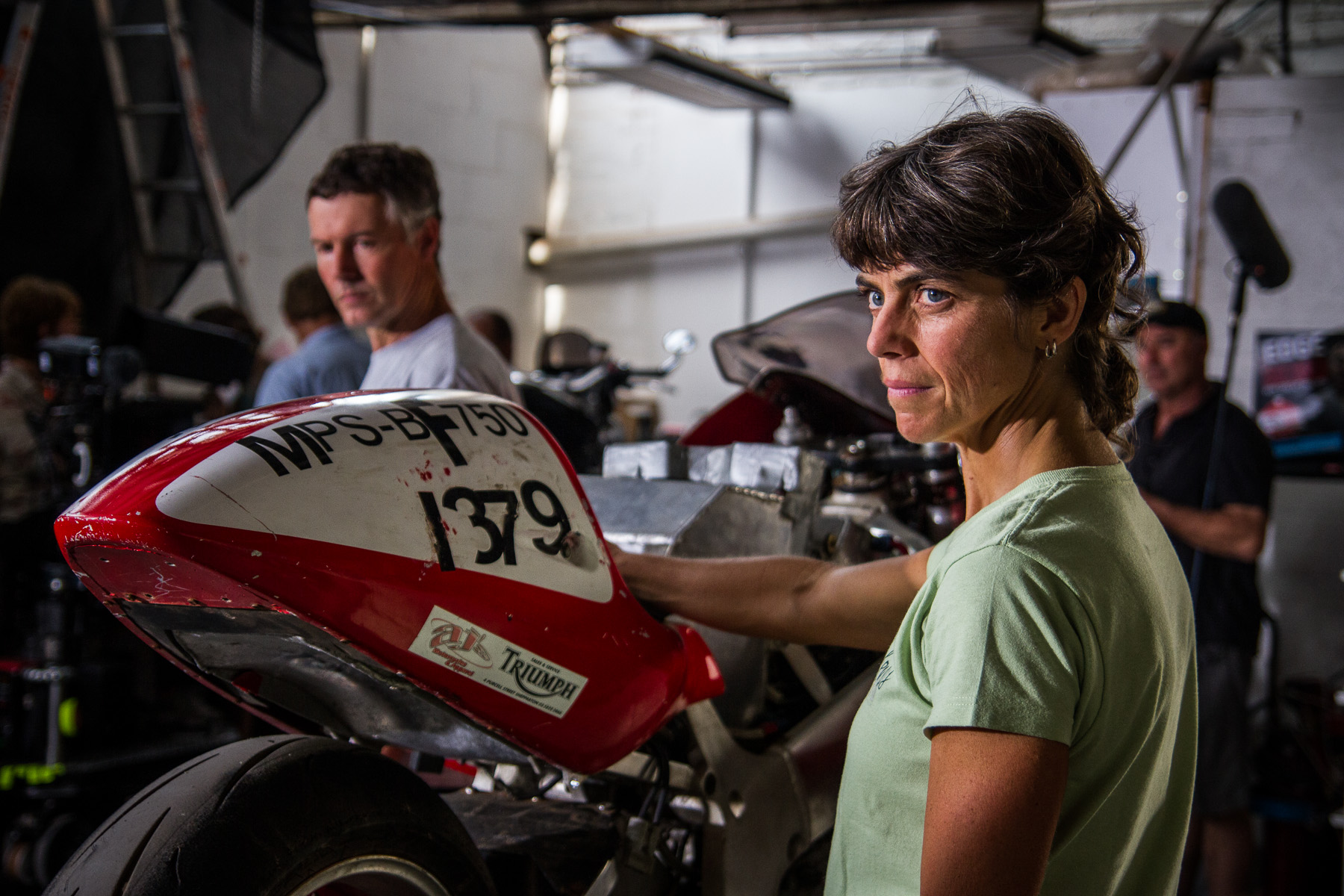 By the age of 12, she was tinkering with her own bikes, pulling bits off to look and learn, then reassembling them. It was soon apparent that Kim had high expectations of having a bike that could really perform. When one of her 125 cc bikes just wasn’t cutting it, a suggestion was made that something could be stuck in the headers. She looked curiously at the little bike and wondered, ‘What’s the header?’ Once she figured that out, she pulled it apart, tapped all along the pipes, hoping the mysterious blockage to improved performance would just fall out. A love of bikes was already well and truly in her blood.

While she studied science at university, Kim’s daily ride was a Kawasaki GPZ600. She never owned a car until she was in her 40s! It was at university though, where Kim formed the bonded friendships with fellow riders and continued honing her motorcycling skills on the road. She joined the university’s Pine Gully Road Racing Association and took her daily ride to her first race meet.

On her older model GPZ, Kim was set against the riders of the newer, super-bike inspired sports bikes, like the popular Yamaha R1. Kim slotted herself in with the slow riders, not wanting her older era bike to hold up those leather-clad lads on their latest rockets. However, she soon found herself moving up very quickly through the groups until she ended up in the fastest group of riders. When she lapped the faster lads, they were not happy about a piece of skirt on an older bike blowing them off! Kim reflects on this experience humorously and sees it as the point where she knew she loved to go fast. 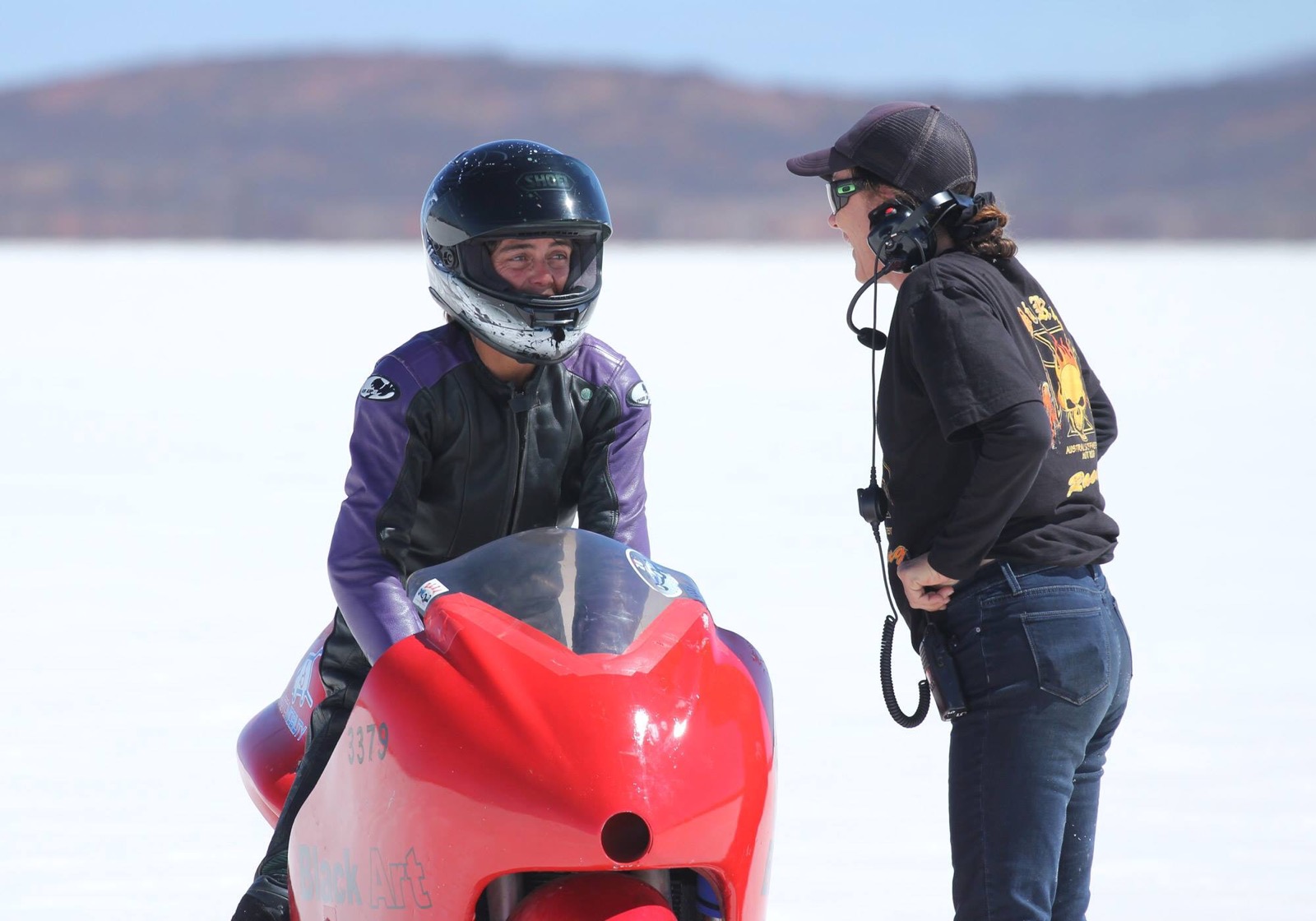 Soon after, Kim met Greg Watters, an accomplished Australian land speed racer and engine builder, at an Australian race meet. He offered her the opportunity to try land speed racing. She didn’t need to think twice about the idea of pinning the throttle at stupidly fast speed across a salt lake![2] Later, along with Jim Higgins, a fellow land speed racer from the USA, they formed the Black Art Racing team. Kim speaks highly of her teammates and having complete trust in each other; she values the close bond they share. Being able to sit atop an engine they’ve built that pushes out incredible horsepower at thousands of revolutions per second, means they are literally putting their lives in each other’s hands.

Kim’s relaxed demeanour was incredible as she described an occasion during the build-up to a land speed run when her engine blew up and the bike burned, with her on it! There are strict rules to execute in the event of something going wrong, so her brain sped up the moment the bike spat a rod through the crankcase and the oil started spilling out. In the microseconds that followed, she processed the rule options in a slow-motion-type headspace; but once resolved, time sped up again and she immediately veered right to get off the track, knowing that every decision she made next was absolutely critical.

The bikes are built without a front brake because it’s all about going fast and not stopping; so with only a small rear brake, she dabbed her foot onto that pedal, already well engulfed in flames. It took a couple of miles for the bike to slow down while she repeatedly dipped her foot into the oil-fed fire to brake. Once the bike slowed to around 18 mph, she bailed! It was such a spectacular exit that many continued to talk about it long afterwards. The damage apart from the bike? Kim sported minor burns, but not much else. 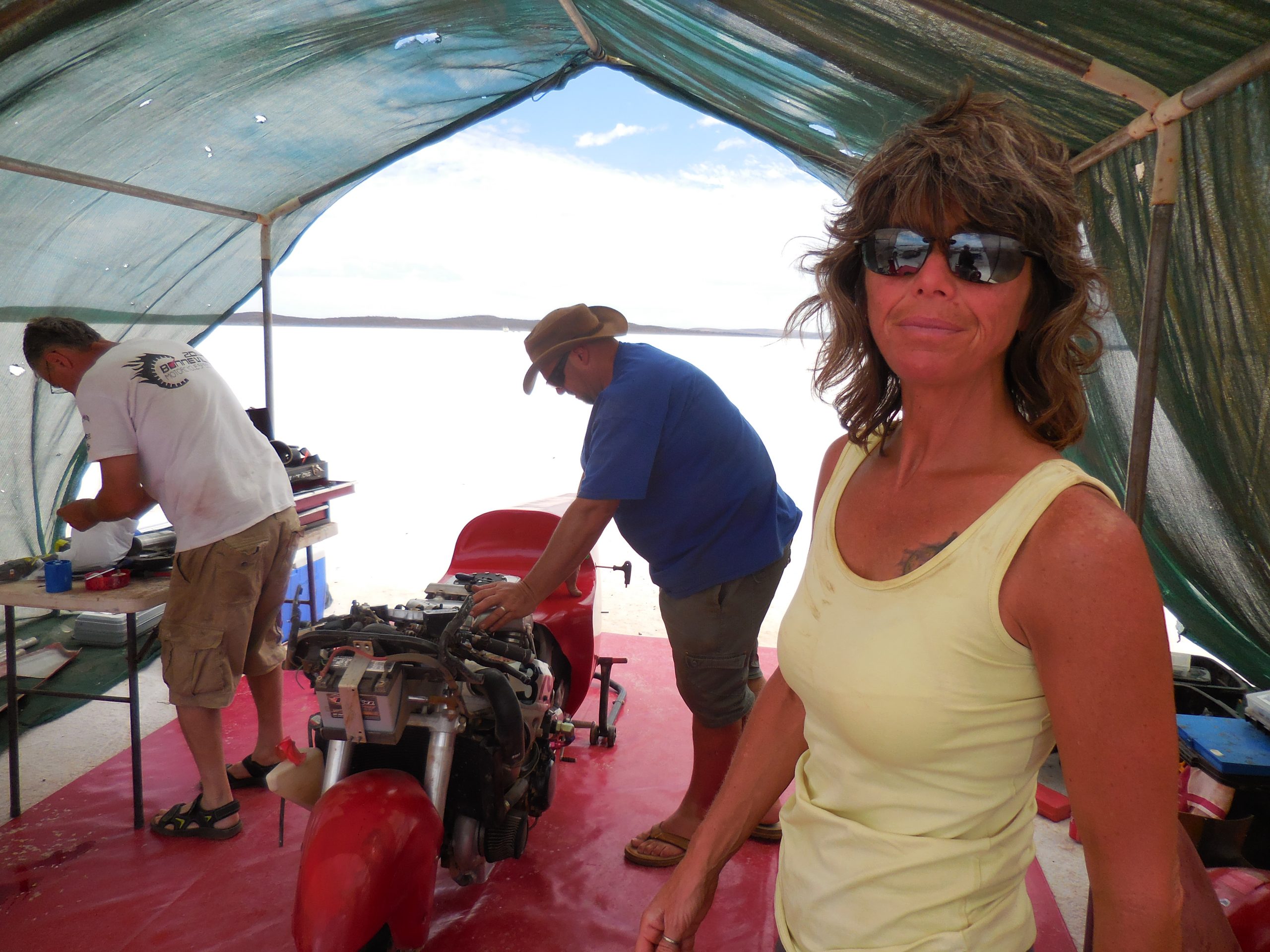 Kim downplays herself saying she is no different to anyone else; preparing to set off on a journey means dealing with the chaos of packing, securing the house, passports and pets. But when travelling to the USA to race, once the plane takes off, all other thoughts fall away, leaving just a grounded mindset in place. Nothing else matters now.

When the Black Art Racing team meet up, that focus intensifies as they set about building the bikes. Unlike a local punter who throws their track bike onto a trailer and jostles off for a weekend track day, these bikes are built at every meet, with Kim and her teammates spending 15 plus hours each day in preparation.

While the team is tightly bonded and works effortlessly together, the moment Kim is on the bike, the world becomes hers alone. ‘In my head I find total clarity. No busy thoughts, no distractions. It’s as if the outside world has disappeared. I hear only my heartbeat, with a few butterflies just beforehand in my stomach. Then my mind focuses on two things: remember to use all the gears and remember to count the milestones,’ Kim laughs! Fact is, there is little room for anything else to enter the mind once the wild ride begins and the silence is broken by howling machinery and wind.

The run itself sounds terrifying. Imagine a bike winding up to full power over a few miles but somewhat out of control, skating across the salt surface, barely keeping the back wheel to the ground, then add the blur of movement at speed while keeping it straight between the markers spaced at 20 metres. Sound easy? Try that at 200 mph! It’s at around 10,000 rpm that the turbo-charge kicks in and the back wheel lights up[3] with the explosion of power propelling the bike from a modest 98 to a full 300 hp! It’s not for the faint-hearted, yet Kim is in the moment, focused, head crouched down, challenging herself, challenging the bike and flying! 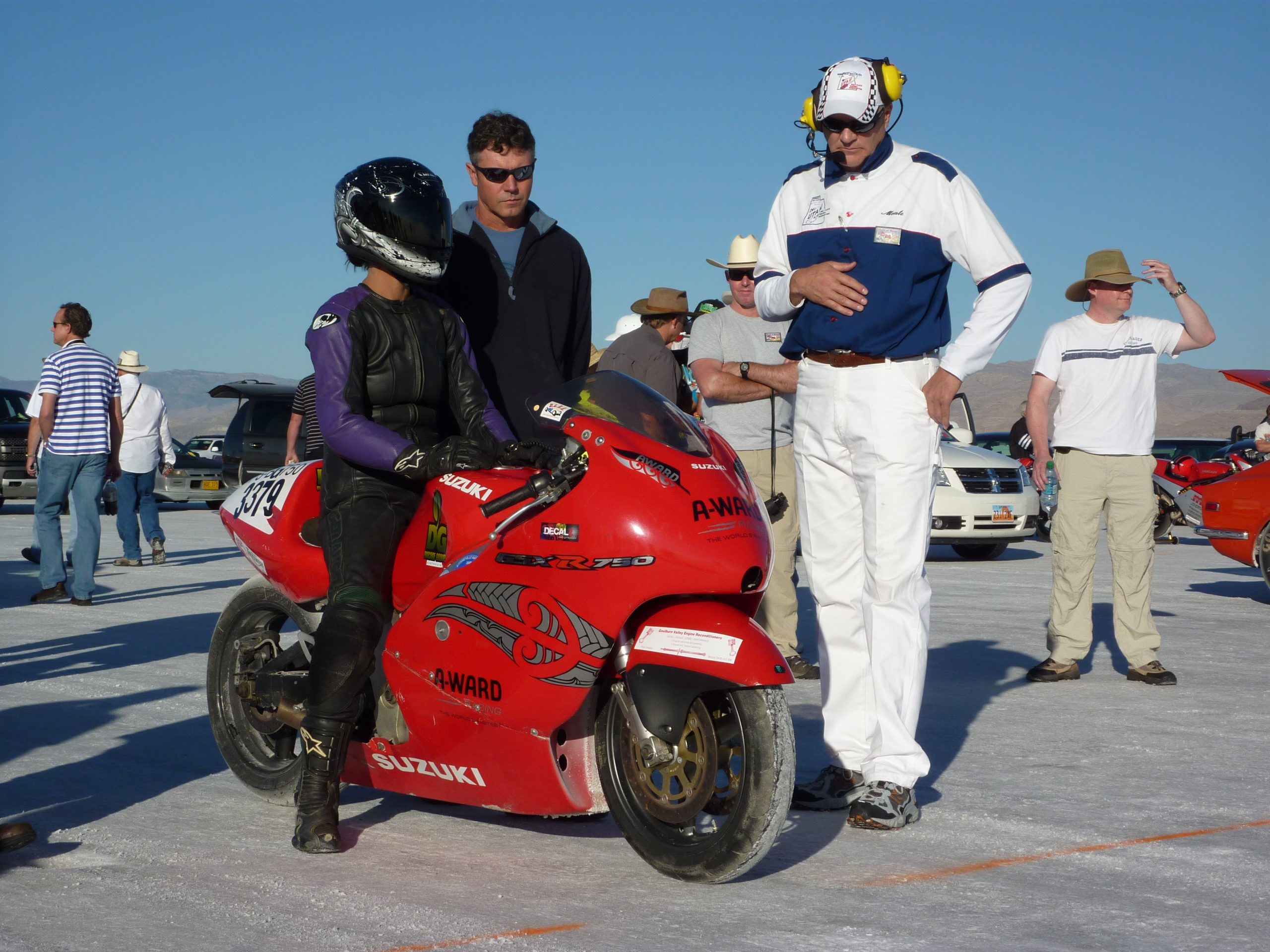 Kim feels privileged and humbled to be able to participate in this elite sport and to be involved with Dry Lakes Racers Australia[4]. She has raced on the salt lake at Lake Gairdner, in the top end of South Australia and at Lake Bonneville in Utah, USA.

In 2016, aboard her turbo-charged, purpose-built 1999 Suzuki GSXR750, Kim streaked across Lake Bonneville and became the first Australian woman to record 244 mph on a sit-on motorcycle. She treats her records lightly, saying, ‘They are temporarily borrowed until someone else borrows it; they are my own personal milestones to improve upon.’

Being one of the few women in the world chasing land speed records, Kim is an inspiration to many, yet this extraordinary woman is as normal and as real as you and I. With the horizon calling across those barren, stark-white plains, chasing the next record to hit a goal of 250 mph on her GSXR750 is what motivates Australia’s fastest woman to reach another personal milestone. Odds are she’ll do it too, as she flicks up those crusted salt diamonds. Kim Krebs is definitely focused on just-a-little-bit-more stupidly fast.

[1] Imperial units, like miles and mph, are used in racing terminology.  [2] Also referred to in the racing world and in the USA as a salt flat.  [3] A slang racing term used to describe the sudden explosion of power.  [4] Australia’s official sanctioning body.