I remember arriving for my learner’s course, staring at the 125 cc Groms all lined up and feeling a stab of nerves deep in my gut at the thought of mounting such an unstable looking machine.

I had never ridden a motorcycle before; I’d always been too reserved, not confident in my ability to control a bike, let alone deal with the shame of falling off.  But I desperately wanted to get my licence so I could ride Rocco, the Yamaha R3 I’d bought the week prior.  By the end of the course, my nerves had been replaced by such childlike enthusiasm that I felt like a little kid at Christmas.

The next morning, I was off to the empty neighbourhood car park with Rocco, to train my skills before venturing onto the roads.  The nerves in my gut returned, my heart pounded through my throat.  I grabbed the handlebars and pushed the start button.  Nothing.  I pushed it again.  Nothing.  Oh, wait… thinking, thinking…flick up the kickstand… yay, the bike started.

Wow!  Feeling the difference between the learner 125 cc Grom and my 300 cc R3 was not to be scoffed at.  The weight, the power, the seating position… now I was actually worried about how to ride this bike above 30 kph without wobbling off the road.

The freedom of riding is irresistible.  I ride everywhere and can’t remember the last time I drove a car.  Rocco means more to me than a transportation method.  He’s my escape; even the work commute is joyful now.  The community I’ve joined and the people I’ve met since riding are awesome.  I’ve ridden with men and women from all walks of life, always learning from their diverse experiences and advice. 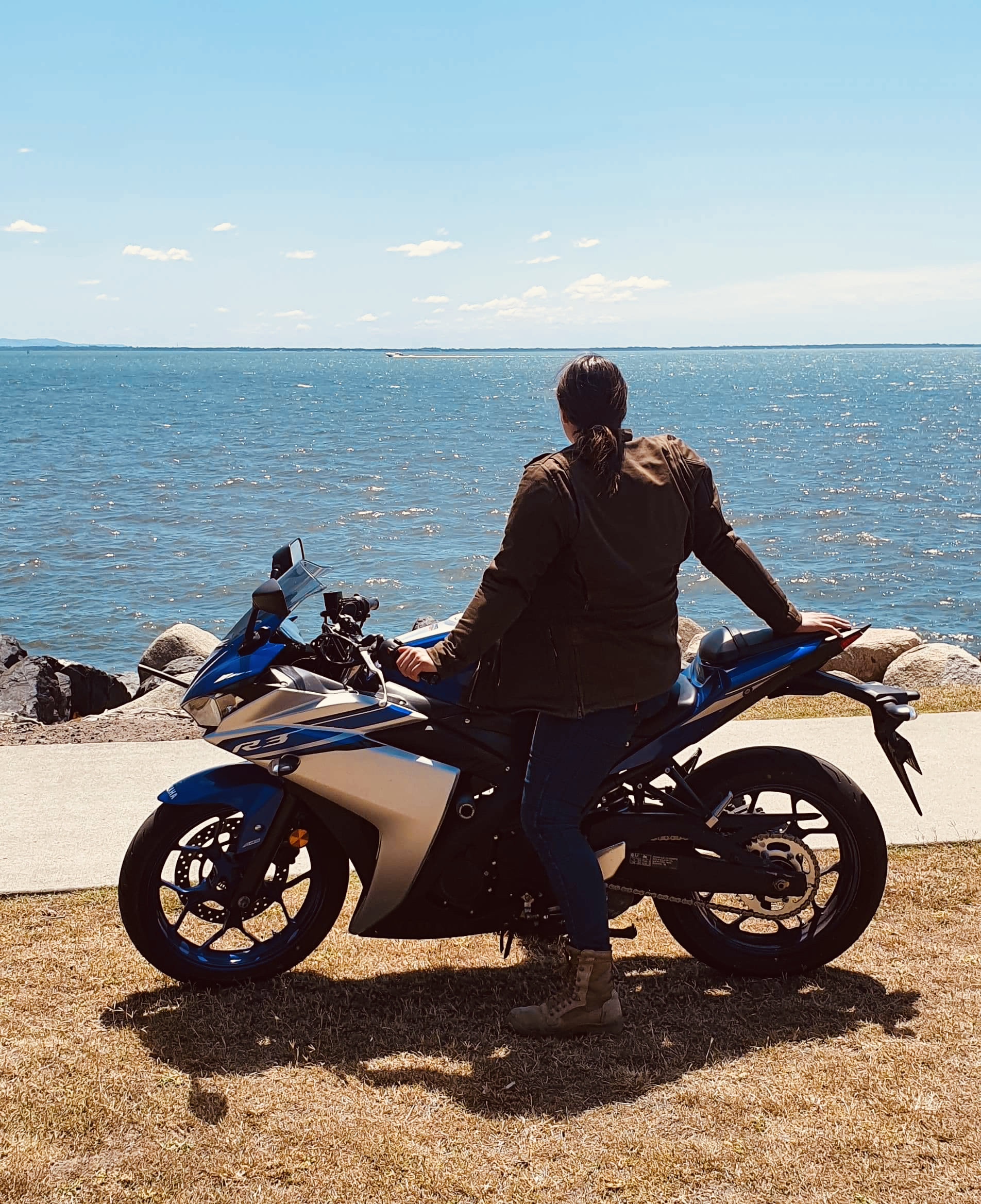 My dream ride is when I’m all alone on the open road, when the air is cool and I’ve got a full tank of fuel.  My favourite ride is from Caloundra, along Steve Irwin Way, up the mountains to Maleny, then back towards Woodford, over Mt Mee, through Dayboro and towards Samford, in Queensland.  Riding those winding mountain roads alone in the cold morning air and fresh country smells, then hitting the longer, flat roads, is the best drug in the world.  Highly addictive!  Motorcycles should come with that warning!

I tried to explain these feelings to my mum.  She just shook her head and said, ‘It’s too dangerous!  Why would you risk your life for this?’

Mum isn’t wrong.  It is dangerous and there have been times when my overconfidence convinced me I was basically a MotoGP champion, resulting in several close calls.  I’ve run a corner wide, skidding along the gravel on the roadside to leave myself teetering on the edge of an overhang.  I’ve had more close calls with cars and trucks than I can count.  For me though, the benefits far outweigh the dangers.

Every mistake I make, I only make once.  I learn from stories and the advice of other riders; I strive to learn from their mistakes, too.  The joy I feel from riding is worth the danger 100 times over and I mitigate the risk as much as possible.

What is also great is the prevalence of female riders.  It’s a rare day to ride the mountains without passing other women motorcyclists.  When I started riding Rocco, I felt some trepidation, fearful any mistakes would have the consequence of not being taken seriously as a rider, simply because I’m female.  My worries were in vain; I’ve been welcomed with open arms into the biking community and I’m honoured to be part of it.

Feeling fear doesn’t mean you can’t ride a bike, it merely shows you’re learning something new and you’re aware of the risks.  Fear is healthy and you shouldn’t let it stop you.

My one piece of advice: accept the fear you feel, throw your leg over that bike and flick up that kickstand!  Trust me, it’s worth it. 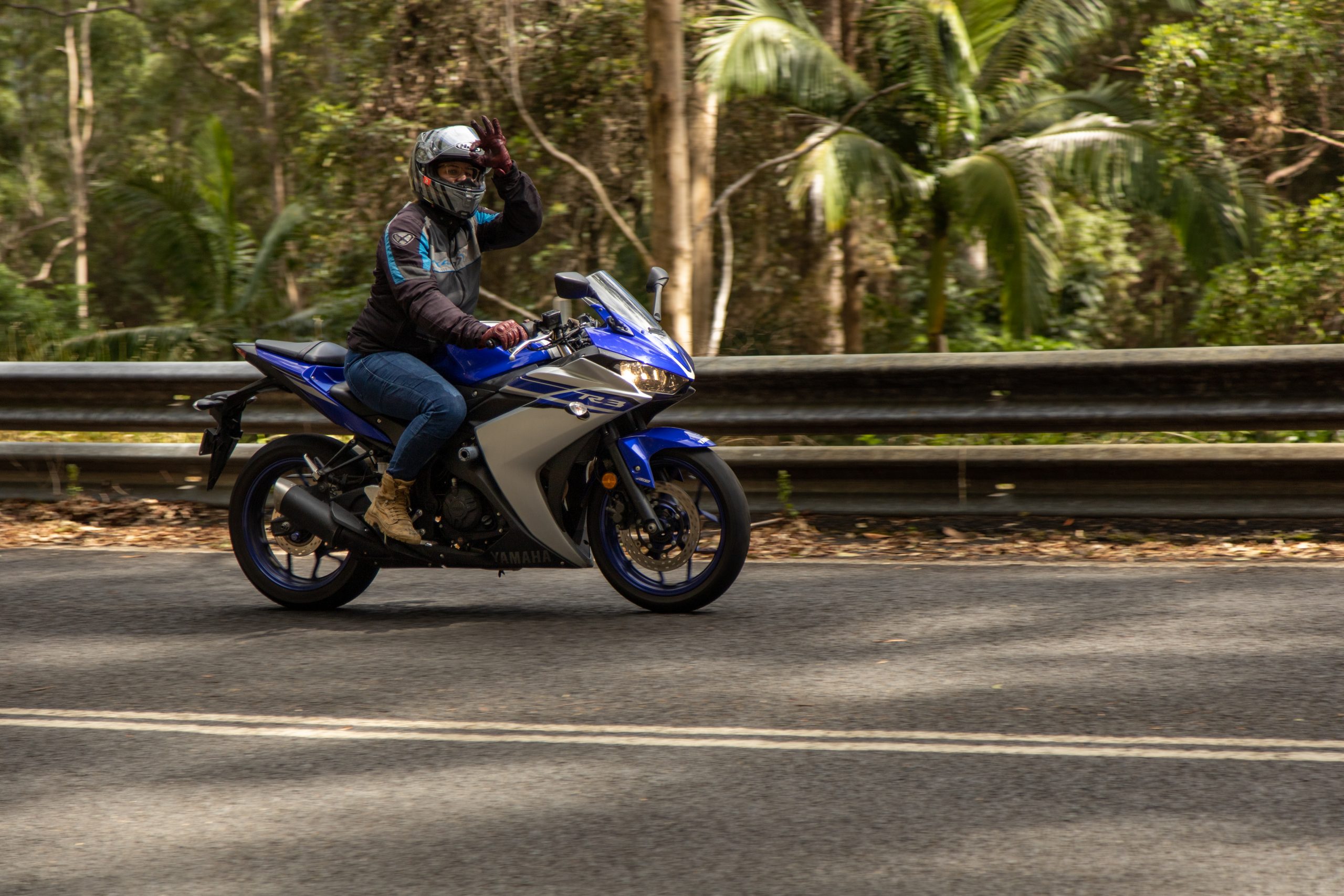