Farming neighbours and good friends Teresa and Tania recently became part of the motorbike fraternity, or as their grown-up children mutter, ‘having a midlife crisis’. The way I see it, these two lasses on their L plates are riding the wheels off their LAMS bikes throughout the beautiful New Zealand countryside around Rotorua.

Teresa is 170 cm and her steed is a 2020 Honda CB500F; Tania at 158 cm chose a 2017 Yamaha MT-03. Together we rode to a local café, The Big Cow at Te Poi, for lunch, a popular spot for all sorts of motoring enthusiasts, out with their gleaming bikes and grunty hot rods enjoying the gorgeous summer day and a coldie or two. We chatted about how these lasses felt riding on the roads, instead of dodging cows and steaming poo along their farm tracks.

Teresa and Tania both admitted feeling more than a little scared when they started out, which is fairly common for most new riders, but with country roads at their disposal they’re able to stay fairly clear of the busier traffic. This has them feeling safer to venture out for a good amount of seat time to get accustomed to their bikes and the bitumen. 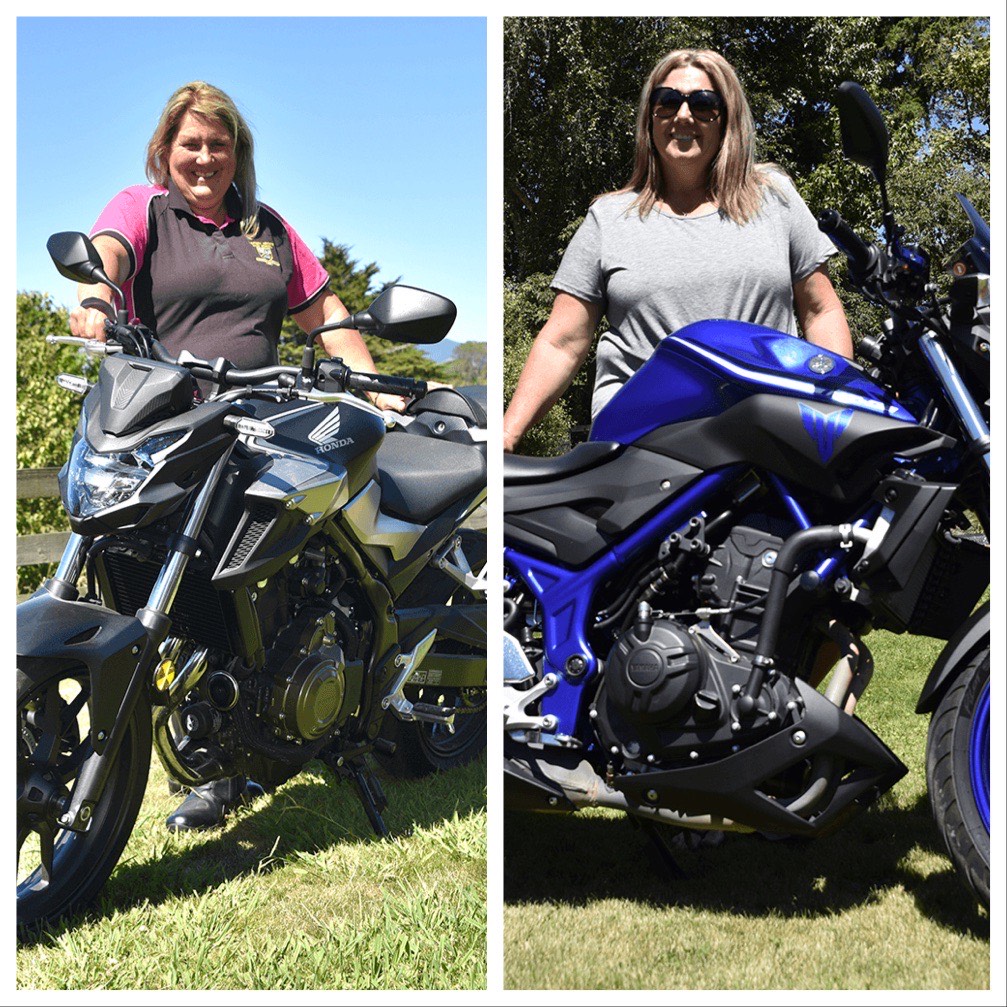 Teresa, to the left and Tania with their trusty steeds

In NZ, we are fortunate to have heavily subsidised courses available through the government’s ACC and I recommend the three levels to all riders, from learners to those wanting to up-skill. Aware of the need for training and experience, Tania spoke highly of the ACC Ride Forever Bronze course she’d completed. ‘I felt very nervous about cornering and emergency braking, but after doing it on the course, I feel much more confident and am glad I did it. I now feel I could ride to Auckland or Wellington,’ said Tania. 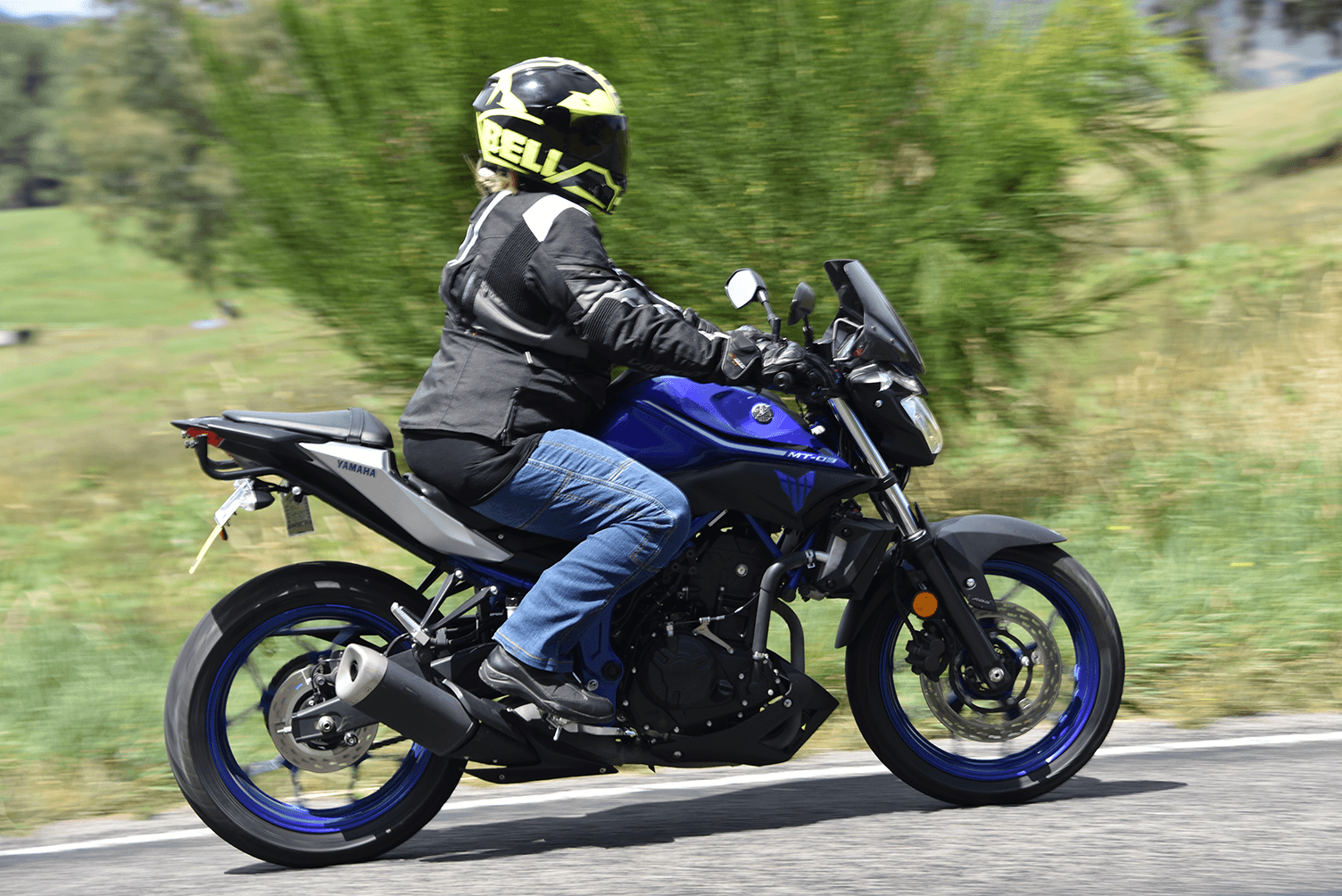 Besides honing skills and gaining confidence, Teresa highlighted that style and comfort were important considerations, saying, ‘I like the sit up riding style, it feels nice to ride.’ Super keen to get out and join her friends, she happily shared, ‘My hubby was going to get his licence and a road bike, but I beat him to it.’

They had both considered what was important prior to purchasing their motorbikes relative to bike size, weight, ease of handling, as well as seat position and comfort. What they enjoyed most about riding was the sense of freedom in getting away from the farm. Tania confessed, ‘It clears my mind and I stop thinking about the many things that can consume you being a farmer. Having to focus on the road, other traffic and the like, I feel the sense of freedom being one with the bike. It is exhilarating!’

After lunch, I took these two naked market-rivals out for a spin to gauge their general performance and rideability, my focus to consider what’s relevant for a learner rider.

Teresa’s CB500F looked great with its tried and trusted sporty styling, muscular appearance, ceramic-coated engine covers adding some bling and a decent bit of attitude. With 471 cc of power and weighing only 190 kg, it was easy to manoeuvre, even with the engine off; in addition to the styling and the seat height, the Honda was the perfect choice for Teresa. 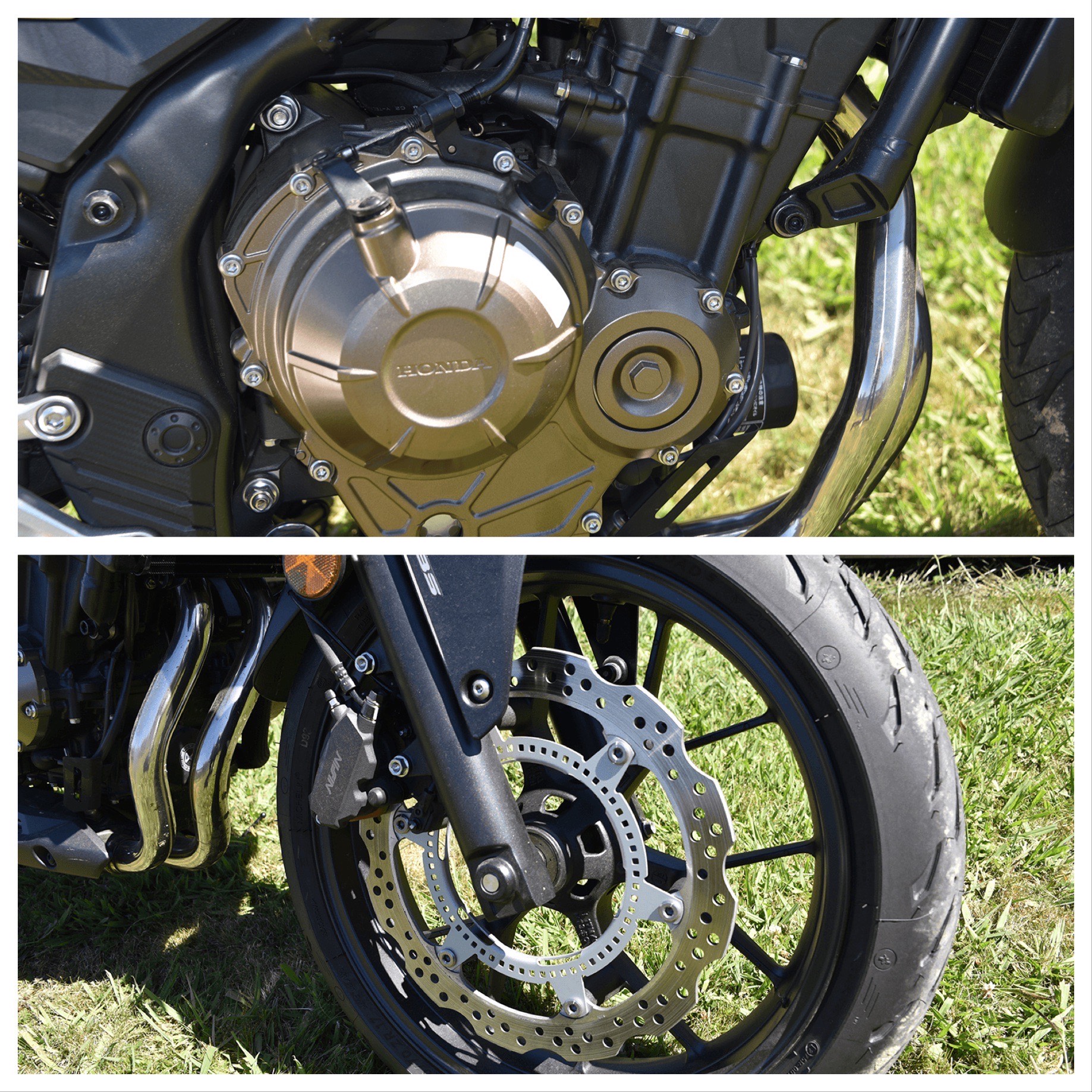 I wanted to see how tough it was through the corners and throwing this polite-mannered bike into the twisties was enormous amounts of fun, weaving in and out no effort at all. Very adept at slow speeds, it also handled the open road with steady assurance. It inhaled the longer sweeping bends and even with my longer legs, I found the seating position comfortable and foot controls easily accessible.

I felt the need to drop down a gear and open the throttle up for a clean overtake, its purposeful performance more than adequate for the LAMS market. The throttle responded well going through its paces, the 6-speed gear box a very smooth addition to the slipper clutch, making gear-changing a breeze; the progressive braking with ABS is a huge safety feature, especially for learners. 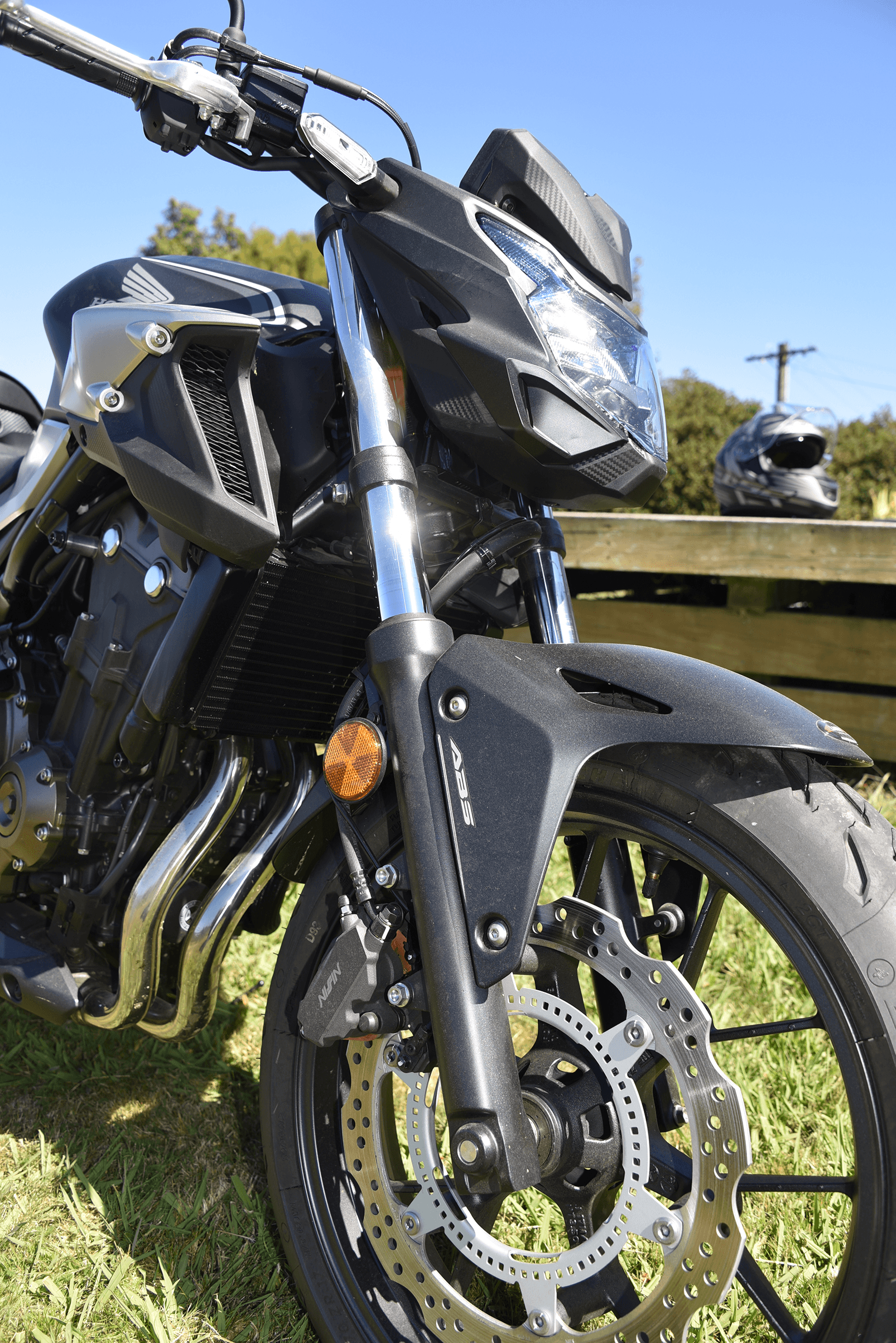 Solid, muscular appearance of the CB500F

The 17.1 L fuel tank should give this frugal engine about 425 km. The dials are clear on the dash and the naked styling allowed for full view of my surrounds. Nothing to fault with this baby, it was an easy ride that delivered all-round stability on the road. 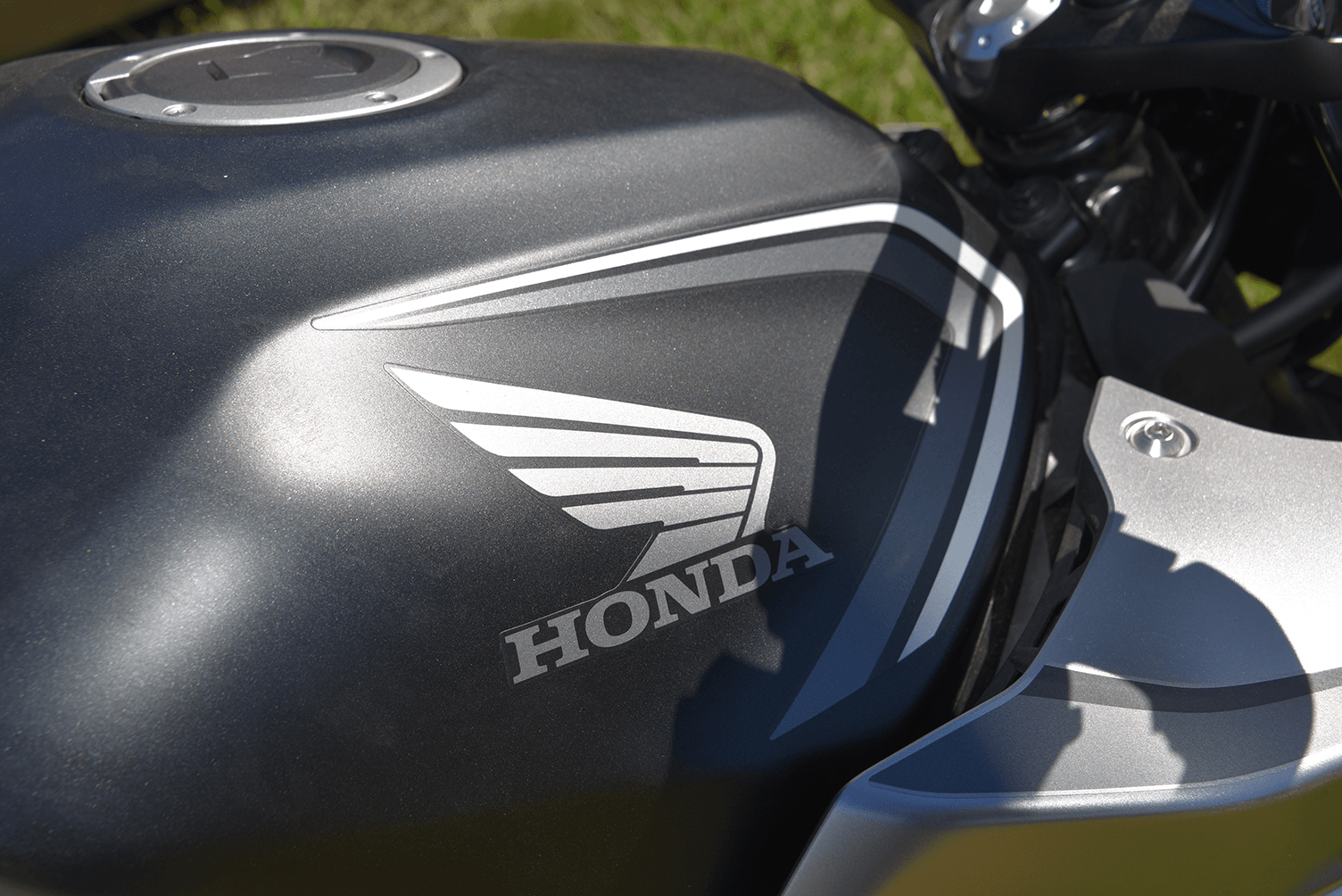 Tania’s MT-03 is a smokin’ hot little number with a lot to offer. Although another lightweight in the naked sport bike category, it felt very solidly put together and handled pretty much everything I threw at it. Smaller framed riders should find it ergonomically adaptable with the upright rider position; the foot pegs are positioned fairly high, with a low seat height and easy to reach handlebars. Being able to put your feet flat on the ground gives a rider real stability and greater confidence to a learner. Being quite tall however, I felt my leg position would become a little uncomfortable on any lengthy ride. 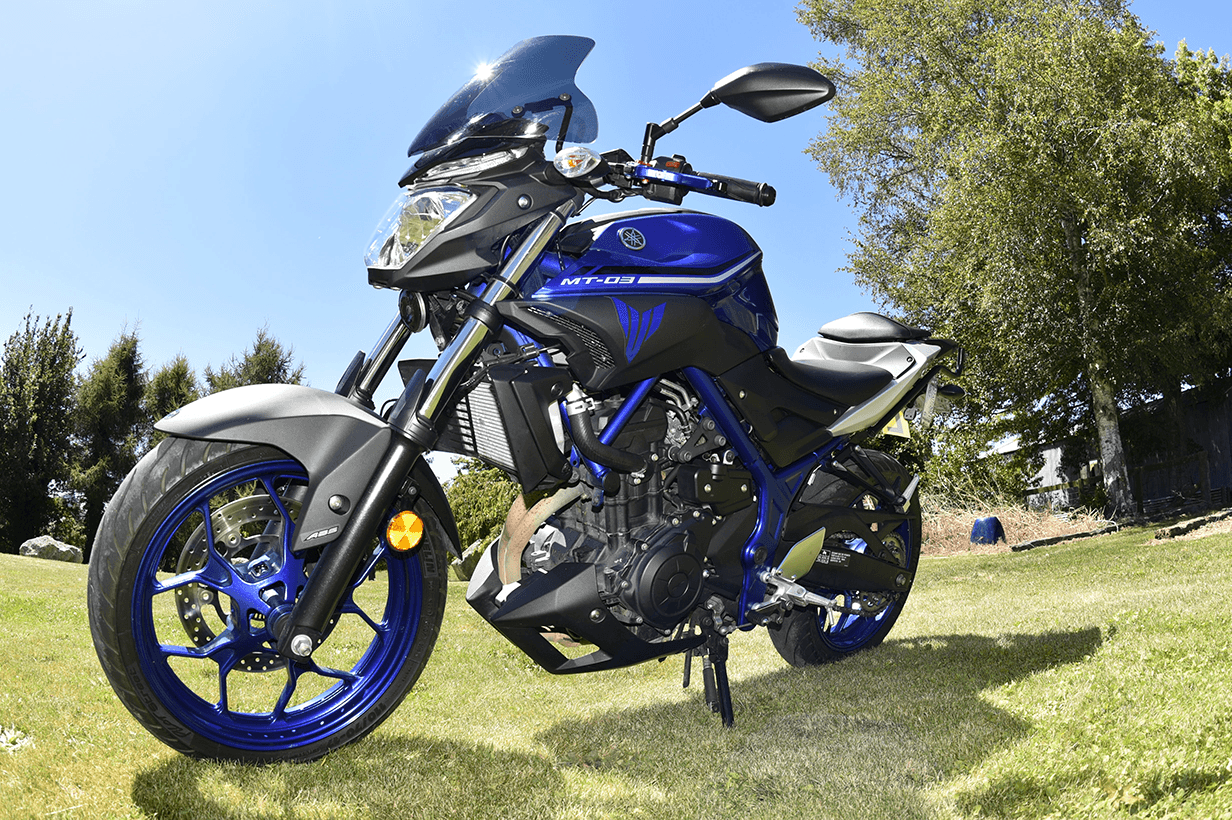 At 168 kg, it’s easy to manoeuvre at low speed or while the engine is off; it’s also light enough to pick up if dropped.This model offers completely adequate torque and smooth transition through the 6-speed gearing, including an ease in finding neutral, though you’ll need to chuck it down a gear to overtake. The clutch set up is light and responsive and a cinch to use. 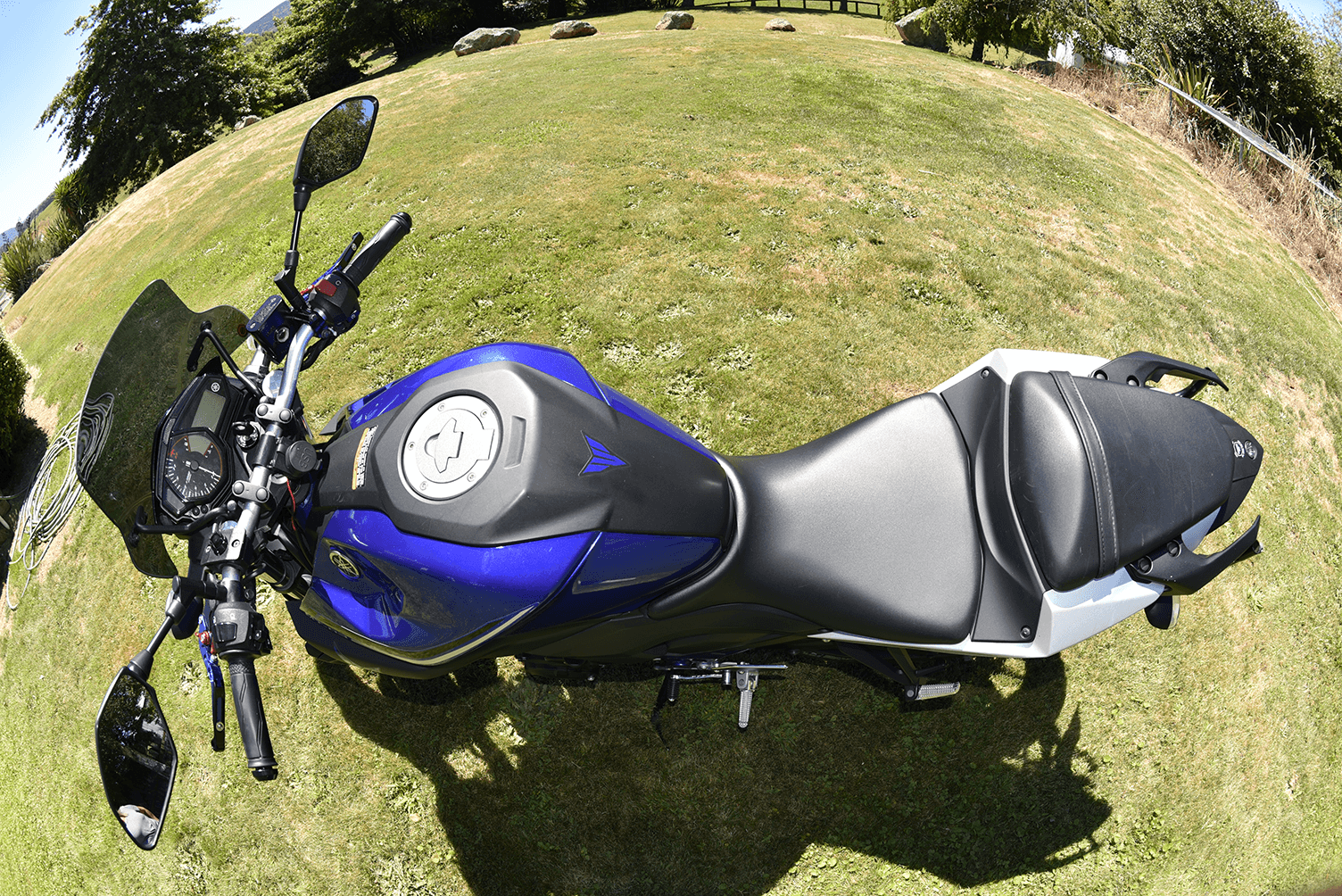 With only 321 cc the MT-03 is still punchy, there’s enough oomph to get in a few thrills; it was very agile, easily handling being tossed in and out of the twisties. Even with higher revs there wasn’t any annoying engine vibration through the body or hands, as often felt with smaller engines. The ABS gave total confidence in its competent stopping abilities, taking on hard, quick stopping with perfection. 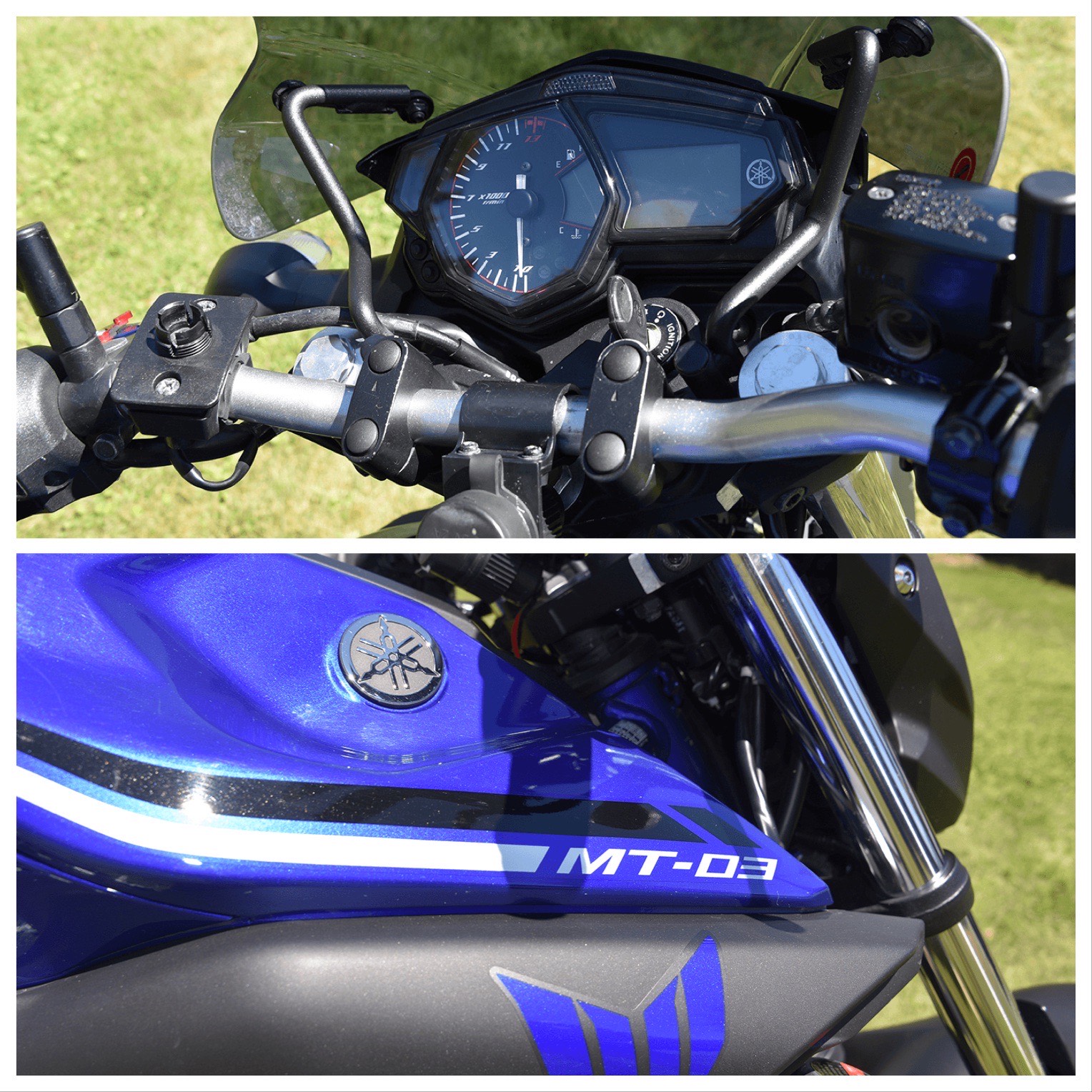 In summary, the CB500F and MT-03 are LAMS user-friendly, fun and practical. The controls are light and easy to reach; the upright riding position giving a fairly compact feel. With modern fuel injection systems there’s no fiddly mechanical choke to mess with, making cold starts a breeze. Both bikes hustled along willingly, cornering was effortless, tipping in nicely and maintaining a consistent line. They accepted light trail braking into corners, without delay or loss of control.

Performance and rideability for both were perfectly adequate for the LAMS market. Being terrific all-rounders, they could hold their own among the unrestricted heavyweights. These two farming lasses have chosen well and are super keen to just get out there on the wind, chasing that sense of freedom.