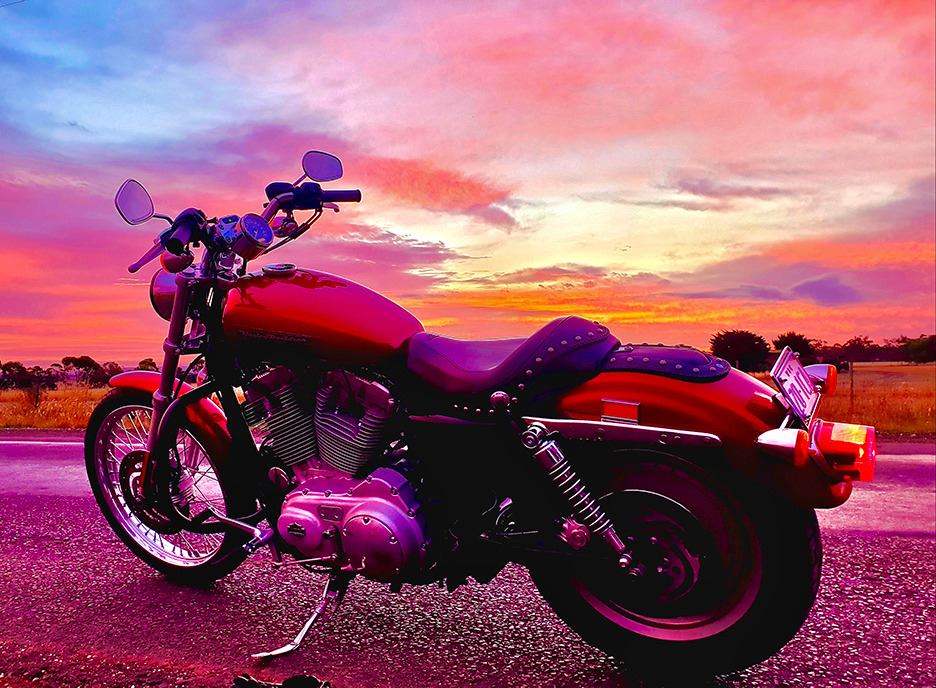 ‘Everyone loves a sunset shot, but add a bike and it becomes a powerful pic.’

Kim first got her motorcycle licence in 1979, on her Honda 175, which she rode for a couple of years, then had a break from motorcycling for over 30 years… life kinda stalls that way sometimes. 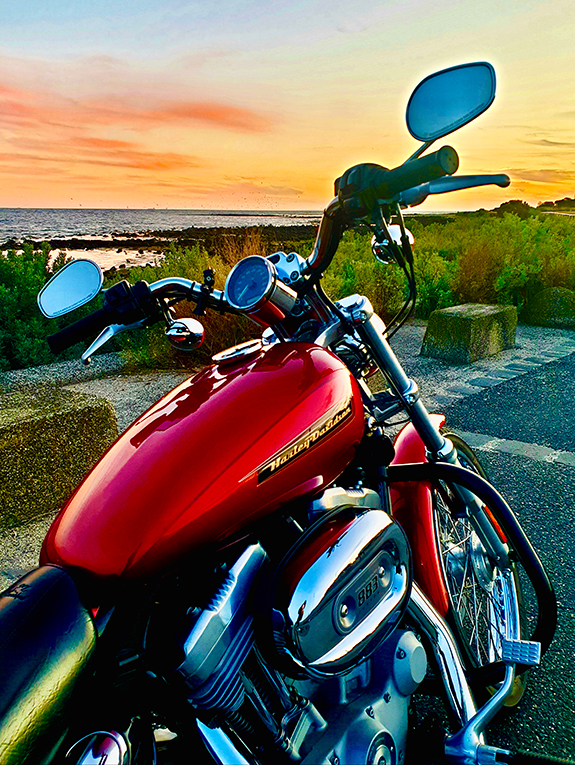 ‘One of the many reasons I ride. I can’t think of anything more beautiful than the freedom, peace and passion I feel when I’m out on The Phoenix.’

Kickstarted back into the living, in December 2012 with a nice little tax return pressie… Kim shouted herself a sweet red, 2004 Harley Davidson Sportster, 883 with 73,000 km on the clock. That bike took her places she’d never been before, riding to Queensland… ‘Which was an amazing experience, worth having’, recalls Kim and around New South Wales and Victoria; she just loved exploring on her own. 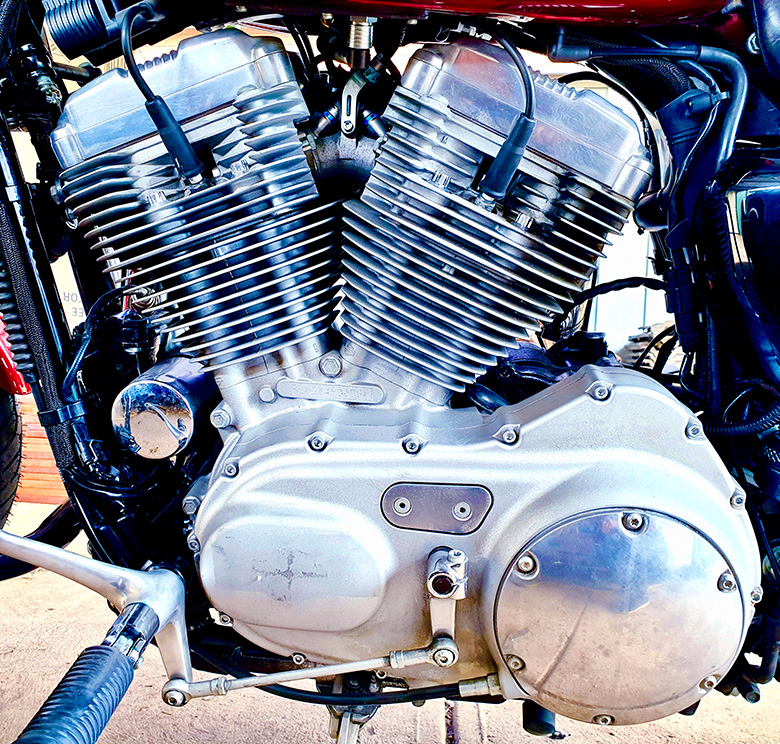 ‘The heart of The Phoenix; when I start her up our hearts beat as one… we become one.’

She added another 52,000 km before that Sporty and Kim got pranged up in an accident, October 2018. 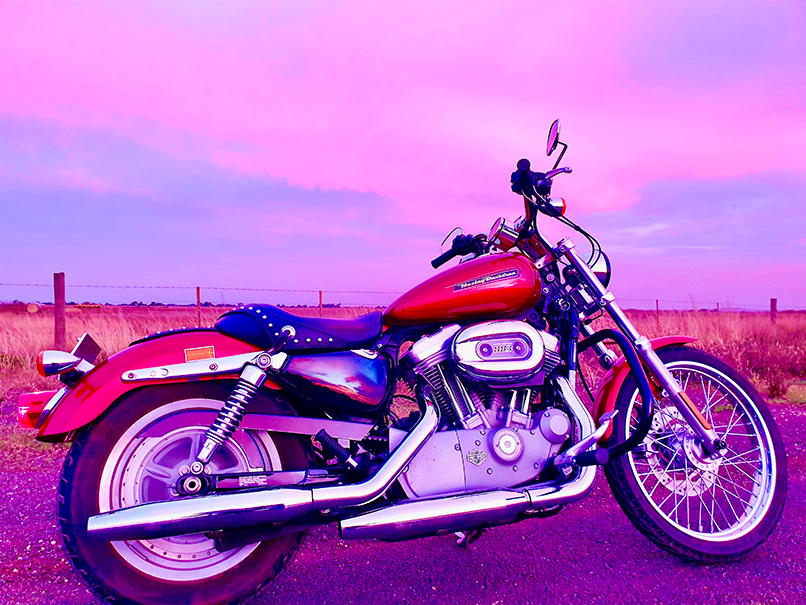 ‘The colour of the beautiful Melton sunset turned my girl pink too.’

Unfortunately, following on from the accident Kim fell on some hard times, even months after semi-recovered from her physical injuries, she struggled so, with the mental trauma of the accident. Hearing other bikes and being unable to ride, sent her spiralling into a depressive state. Whenever she could though, she’d join up with friends just to get a ride in as pillion… it was a therapeutic need. 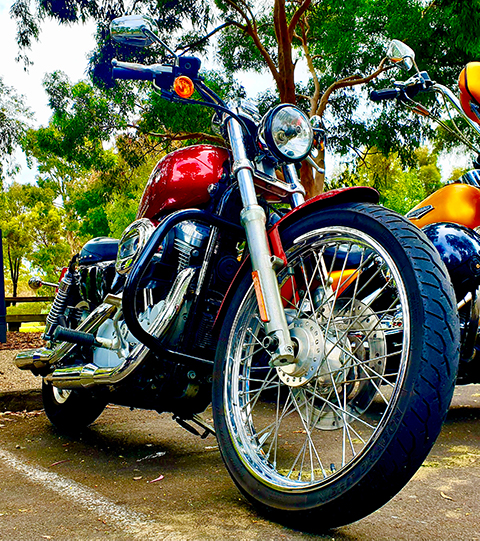 ‘Looking staunch in Deer Park on a short group ride.’

After 2 years without a bike, having turned 60 in March 2020, Kim was determined to get another Sportster before Christmas.  The search began, the main requirement being a long-range tank and it not be black. When this hot little cherry red, 2008 Harley Davidson Custom Sportster, 883, popped up on Gumtree, there was instant love. 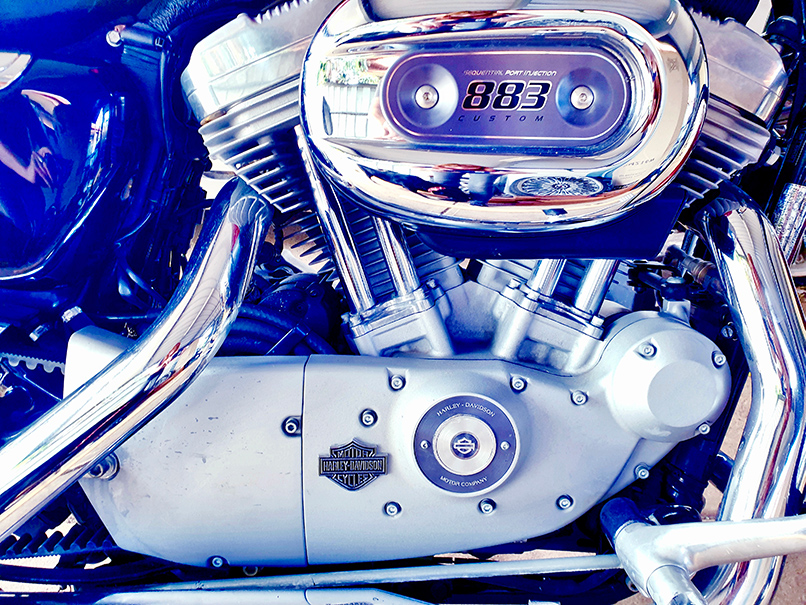 ‘If I’m not riding, my world turns grey…’

There was a bit of work to be done on it as it wasn’t in the best of nick when Kim bought it, having been sitting around collecting rust and spiders for a couple of years, unloved and neglected. It had stock standard pipes which sounded like crap, so they were modified to sound as she should. 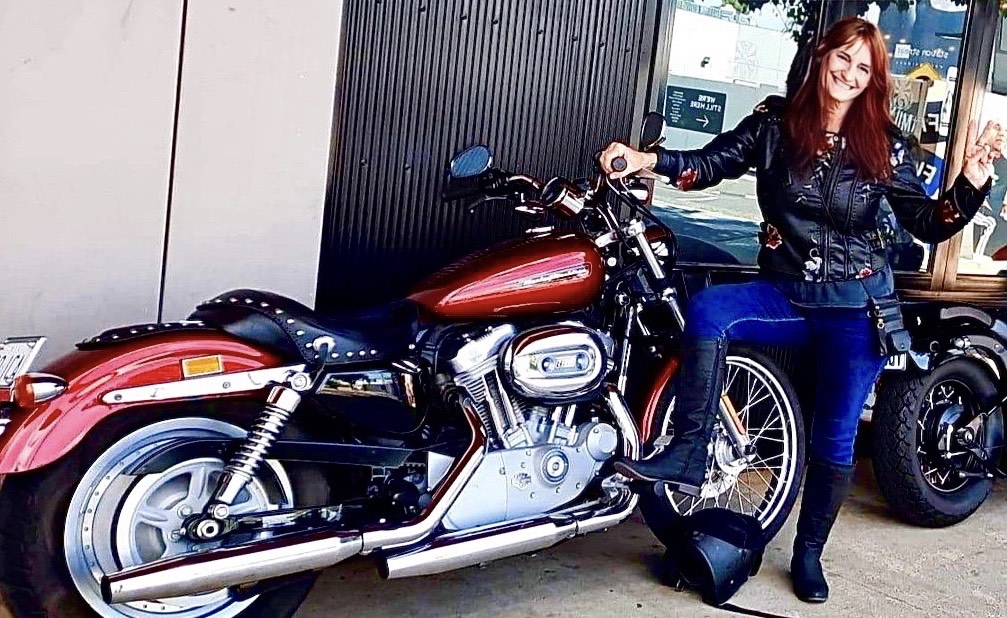 ‘On a Maidens On Motorcycles ride…’

The name Cherry Bomb first came to mind, but once she was home and the sunlight brought out a stunning, golden, red glow, the name The Phoenix overpowered the cherry and ‘It suits her to a T, Kim reckons. A work in progress… as are a lot of our bikes, Kim has designed her own phoenix hybrid with an eagle to go on the tank. There’s a set of black 8″ mini apes about to go on, to make The Phoenix look sexier and feel more comfortable. 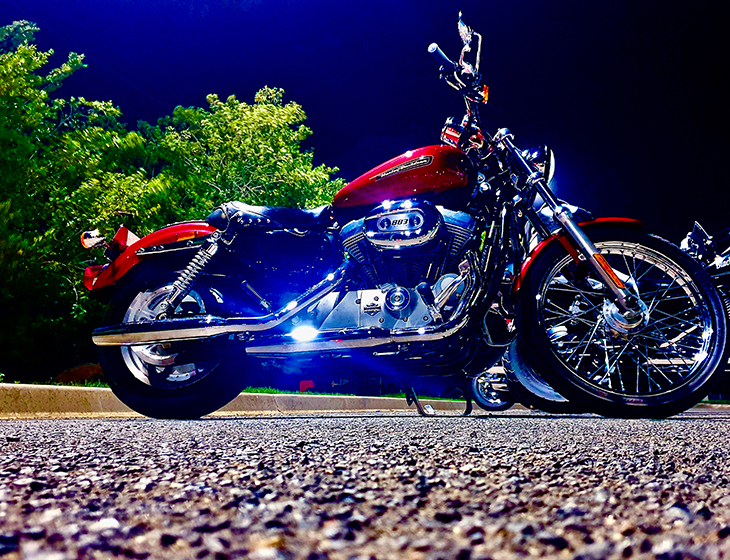 ‘Night shot at a social gathering in Laverton North, VIC.’

Kim is a genuine all-out rider and enjoys discovering new places; her dream is to take The Phoenix around Australia enjoying her other love, photography. The Phoenix is her life and her passion… and a beautiful, classy little lady she is at that…

Kim is part of a small and elite all ladies group Maidens On Motorcycles, aka M.O.M. a 16 member hand-picked group, of likeminded ladies, who are creating and strengthening the bonds between each other each time they meet. Rides are not as important as the strength of the group as women… the rides build confidence of women, riding within a group. 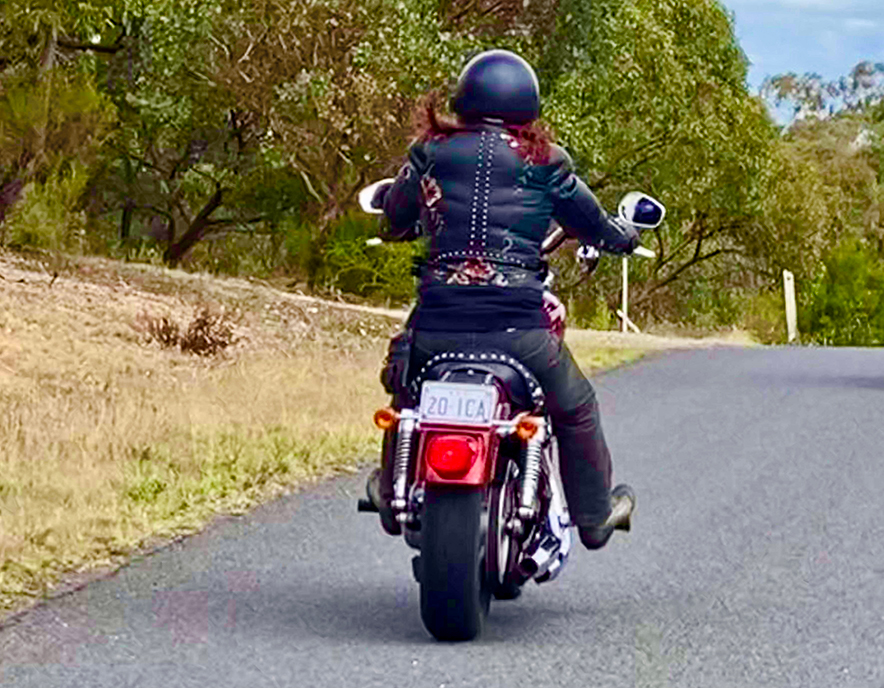 ‘Where I am most at peace…’

Kim’s motto is: Age is but a number… just get out there and do it, you’ll never look back. 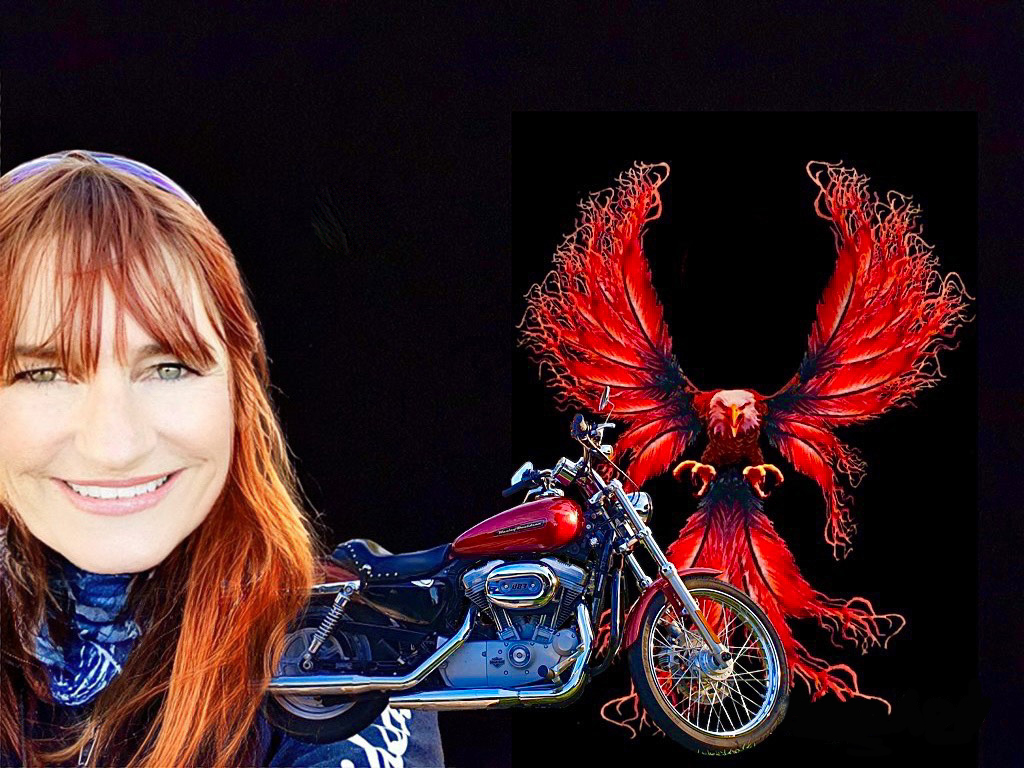 ‘Ah, I’ve been here many times on my solo travels, quick beer, stretch the pins and carry on… that’s my routine, both sunshine and rain.’