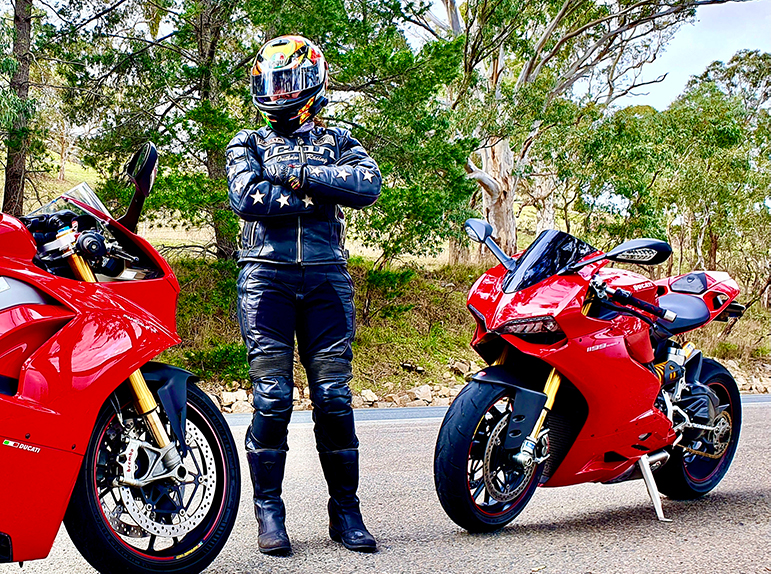 Red has been known to visually stimulate an adrenalin release, creating a feeling of speed and excitement. Red also symbolises love, passion and sensuality, so not surprisingly it’s been Ducati’s trademark colour since their V-twin sports bikes were produced from the 1970s. Although there’s other colours in the livery, the sassy red along with the distinctive sounds, identifies a Ducati from any other bike on the road.

If you dig sophisticated machinery, Ducati is for you, none more adored than their notably iconic Panigale range, fitted with race technology that originated from Moto GP research and development. It offers twin-cylinder, or four-cylinder engines with capacities varying, depending on model type and purpose. There is a series of Panigale superbikes with a start-off base model, then the S model… which is the beginning of the real fancy bling, to the top of the range, R model; the crux being, one is expensive, one is more expensive, and one is ridiculously expensive. Simples!

Note from Madam Rider: Reviewing the twin-cylinder 2013 Ducati 1199S Panigale, and the four-cylinder, 2019 Ducati V4S Panigale is our Freelance Journalist, Mary Knightsriders, an experienced motorcyclist since 1995… pint-sized in stature at 157 cm (5’2’’) but plentiful in presence, she’s adventurous and gutsy.

Warning… these bikes aren’t for the novice or faint-hearted.

This is my ride, known as Supergirl, she’s way more bike than I will ever need, but I love her to bits… absolutely phenomenal to ride, especially around those Adelaide hills.

Some standard tech specs to get you in the headspace of what these machines are about: 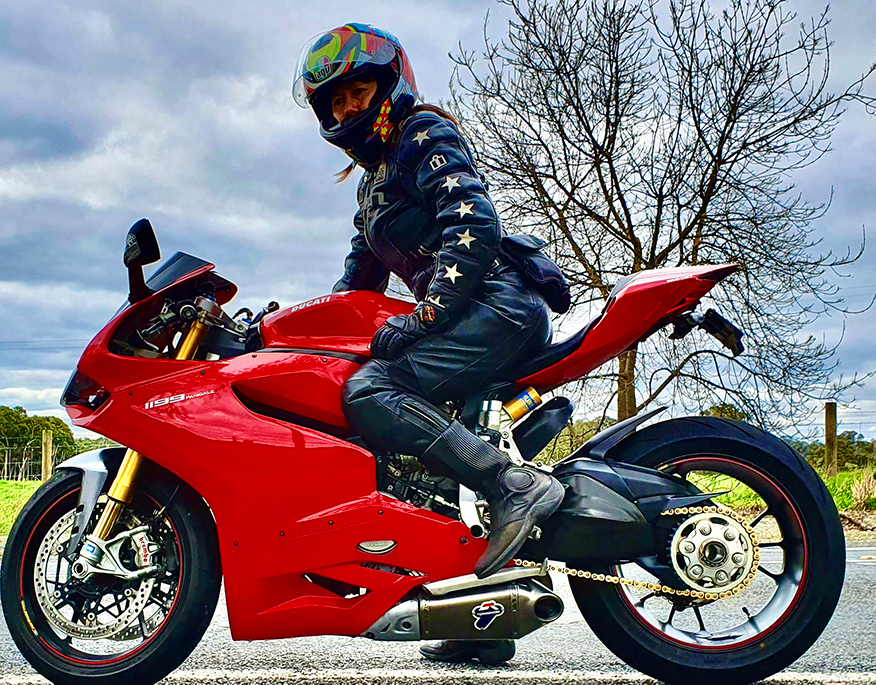 The 1199S Panigale model was a massive step forwards for Ducati, breaking the mould, introducing design features that continue to be used through to the V4 Panigales. With 1198 cc, 71.2 cubic inches and a kerb weight of only 188 kg, it has a terrifying power-to-weight ratio, yet it’s so easy to ride.

Simply turning the key in the ignition brings about an anticipation for excitement. Pushing the start button cranks the Desmodromic valves, firing life into the engine. I have aftermarket Termignoni slip-on exhausts which produce a soulful roar, enhancing that distinct Ducati sound. The neighbours definitely know when this bike is started. 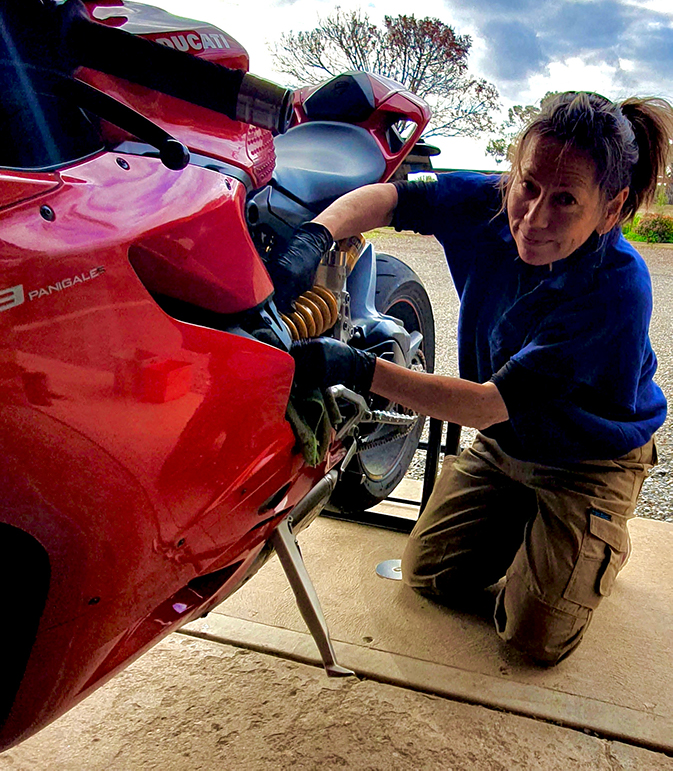 My mental focus kicks in as soon as I’m astride; there’s the resounding thump as Supergirl clicks into gear with her throttle firmly turned so she doesn’t stall. She’s so agile, turning wherever I look. The steering damper helps control any front wheel wiggles and the powerful brake pistons, when hammered on, pull us up super quick. It reminds me of a strong-headed horse, that needs expert control when the signal to gallop has been given. The wild animal within this Panigale could scare the pants off someone unsure of their abilities.

With the quick-shifter, I can change gears without using the clutch; originally developed to smash through them for racing. If the DWC is turned off, expect to launch skywards. 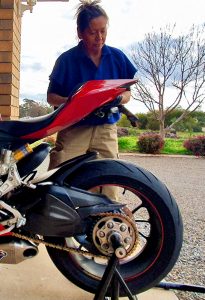 I love hearing the loud bang-pop when accelerating firmly and it’s so addictive I find myself changing down a gear just to repeat the action to hear the sound again.

I ride this bike for pleasure, not as a regular commuter, because in the summer, my right leg fries, when stationary or moving slowly, due to the under-seat exhaust. I wear full leathers to protect my leg from the steak searing heat and have discovered if travelling above 60 kph, there’s enough breeze to disperse that heat. This spoils the Ducati experience in the summertime, though in winter, it’s a fancy kind of seat-warmer.

The typical sports bike riding position means leaning forward and giving my wrists and arms a workout; I squeeze my knees tight towards the tank, to help brace the body. Taller riders complain about the skinny middle, making it ergonomically difficult to hold onto the tank, so adhere grip products to prevent them from slipping. At 5’2” I am on the opposite end of the scale, my knees not reaching that problematic area of the tank, instead they fit perfectly into the moulded side panels that actually look like they’re shaped to fit knees! I hug it like a koala on a gum tree… works for me. 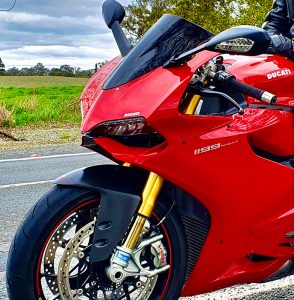 Some imperfections… like most V-twins, the mirrors vibrate and probably the worst thing is the hard slippery seat and the badly postioned metal bracket right where I sit up close to the tank. The more delicate parts of the female anatomy get struck occasionally when riding over a hard bump.

Another reminder this bike is racetrack designed is the stiff factory suspension. While there’s adjustable compression, rebound and preload, it won’t ever ride long-distance like a cruiser or tourer.

The V4S Panigale is nicknamed the V4 and seems to be the sort of eye-candy stuff many folk drool over, especially the latest models with groovy front wings, exceptional race engineering, with phenomenally improved adjustability, the same sassy red, Marchesini wheels, Brembo brakes, Öhlins suspension and polished aluminium single-sided swingarm design as my 1199S… with ditto fancy bling on all three models… V4, V4S and V4R.

Where it differs is the advanced technology following years of Moto GP research and development.

With this 2019 V4S a noticeable difference is the body shape to accommodate two extra pistons, so it’s about 2” broader in the middle, which steals precious leg height for me. I’m still able to touch the ground… just, but reaching for the side-stand, I had to wiggle about on the seat stretching way further forward than on my 1199S; any further there’d be no way I’d reach it. It wasn’t uncomfortable though and that seat sure was plush. The wider tank merely means my knees and thighs hug it better… that can’t be a bad thing, right? 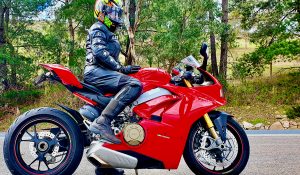 The V4S boasts some of the most advanced electronics in the world so is it any wonder I got lost again, just after the clock instructions. The super sexy instrumentation has colours and computer screen readouts as the 1199S, also changing colour from dark to light depending on the day or night’s light.

The electronics play a huge part in the running and safety of the V4S, e.g., if a tyre is changed to a different size, recalibration is required to recognise that size change otherwise there could be major issues with the electronic traction and slide control systems. 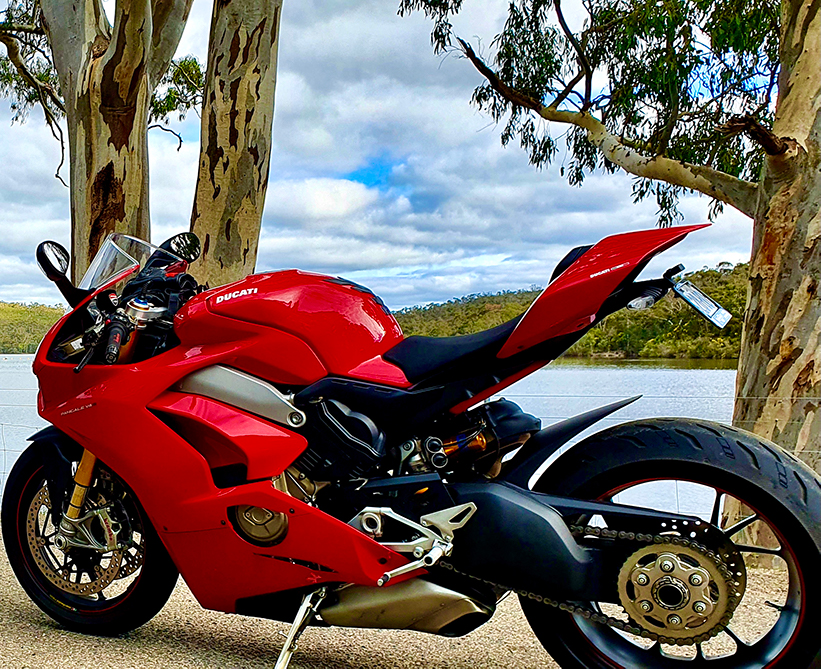 There’s some sensational subtleness going on with the cosmetics… new headlight design, a different tailpiece, tweaks to the fairings, mirrors, exhausts, etc. and ooohhhh wow, did I mention that plush suede seat? Heaven!

One terrible part of the design is the ridiculously small foot pegs. I could barely fit my size 8 boot on them. Getting them changed out to a larger set gave me better surety with foot positioning.

Upon start, the engine provides the same thrilling sequence as the 1199S. The 1103 cc, 67.3 cubic inch four-cylinder engine roar is softened by the standard Ducati exhaust, a large boxy-looking thing slung under the belly, somehow streamlined into the cosmetic design. It sounds cool but nowhere as cool as my 1199S Termignoni exhaust. Enquiring about that system for the V4S… a cool $7,000… mmmmmm, that’s Ducati for you!

Letting the clutch out, I was pleasantly surprised by how slick it was. The quick shifter gear changes were silky smooth and the acceleration subtle, so-much-so it deceived me how fast I was travelling and how quick I got there… truly astounding. 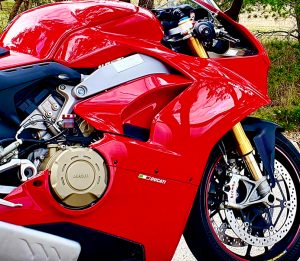 The tweaked suspension felt way more flexible than my 1199S so it was a very comfortable ride.

So incredibly refined and well-mannered and once it gets revving it simply takes your breath away… so stable even with the unprecedented acceleration… aahhhh, let me rephrase that:

I loved all that it offered… the commanding performance kept my eyes like saucers as I repeatedly went wow, wow, wow, wow… and WOW beneath my helmet! 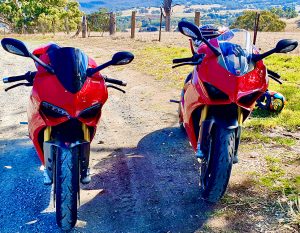 Here I was riding one of the most desired sports bikes on planet earth… the times when I opened the throttle, truly testing my sheer ability to hold on, I was super grateful for that grippy suede-covered seat to help to keep my butt firmly planted… like WOW… I was completely blown away by the exceptional power delivery yet with such light and controlled handling… it was a major headrush that fuzzed my senses a moment.

I found it a little eerie when the engine went very quiet sometimes as I rolled off the throttle. This is an engineering thing, done to shut down two of the pistons to keep the engine cool, while working at lower speeds.

I also noticed in slow traffic, the temperature rises very quickly and the thermostat fan kicks in real early. A Ducati specialist’s explanation is… this is a race bike; the engine runs hot… it’s not meant for a cruisy Sunday coffee run. I sensed a hint of sarcasm in that!

This bike is no longer simples… Moto GP blood. You’re paying big bucks for a modern superbike, so the super race technology is expected.

Both are thrilling bikes to ride… a bike for those into exuberant technical performance, who love to spend large on after-market bling and who enjoy the sophistication of a red, hot, sexy, top-end superbike. 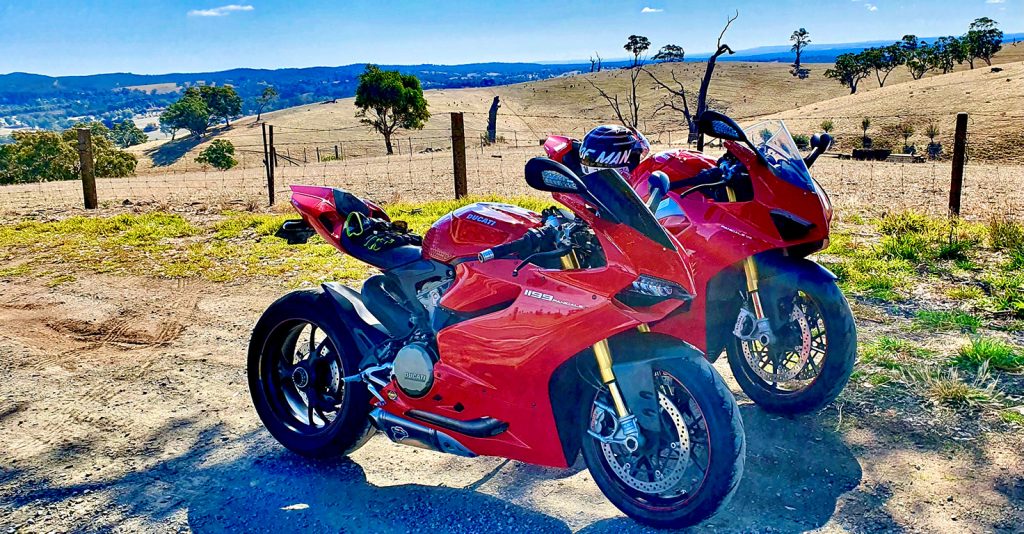 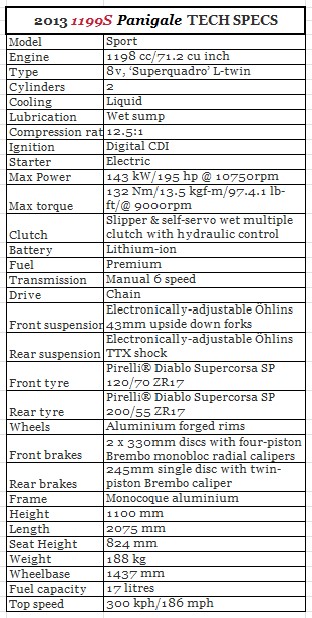